HLB ATM visual impairedFor one thing, the fifth-largest banking group in Malaysia, has the lowest level of loans under the targeted repayment assistance programme within the industry at 7.5% compared with its peer average of 13%.

’s (HLB) financial indicators seem to suggest that the company is in a good position to recover faster than its peers.

For one thing, the fifth-largest banking group in Malaysia, has the lowest level of loans under the targeted repayment assistance programme within the industry at 7.5% compared with its peer average of 13%.

For another, the group has undertaken prudent pre-emptive provisions and it has managed to register above-industry loans growth at 6%.

In addition, HLB’s associate, Bank of Chengdu, is expected to generate better contributions to the group.

“Since then, due to active recovery efforts, unpaid segments have continued to decline. Given these encouraging trends, we are hopeful that there could be a high probability for credit cost to normalise close to pre-Covid-19 levels by the next financial year, ” the brokerage said.

UOB Kay Hian’s sensitivity analysis indicated that the RM600mil pre-emptive provision HLB had built over financial year ended June 30,2020 (FY20), to the first half (H1) of FY21, could be more than sufficient to buffer the group against the expected rise in impaired loans once the targeted assistance ends.

Hence, it is of the view that HLB could be among the first bank to start registering a more normalised credit cost.

HLB reported an annualised net credit cost of 46 basis points (bps) in H1 of FY21, given the additional RM299mil pre-emptive provision incurred. However, with its management keeping its 30bps net credit cost guidance for FY21, this could suggest a sharp downward normalisation in net credit cost towards the 16-bps level in H2 of FY21, UOB Kay Hian said.

For FY22, the brokerage expected a 15-bps net credit cost for HLB, compared with its pre-Covid-19 levels of less than 10bps.

It has maintained a “buy” call on HLB.

The brokerage noted that the mortgage and SME loan approval pipeline remained healthy and should be sufficient to sustain HLB’s FY21 loan growth at above-industry average. It noted that the group had kept its 5%-6% loan growth guidance for FY21.

HLB’s net interest margin (NIM) was also expected to recover further after registering a 15-bps quarter-on-quarter recovery in the second quarter of FY21, supported by repricing of fixed deposits and a better deposit mix.

UOB Kay Hian said HLB’s NIM was expected to remain stable in FY22 on the back of a still favourable deposit mix, which should be sufficient to offset a single 25-bps overnight policy rate cut, if any. 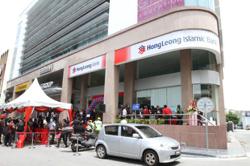