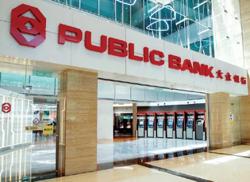 AmInvestment also noted that all lenders reported improvements in interest margins in Q420, underpinned by lower cost of funds.

PETALING JAYA: Core earnings growth for local banks in the calendar year 2020 contracted by some 21% largely due to banks proactively setting aside provisions for potential credit losses.

“The Q4 of 2020 saw banks further raising provisions prudently which dampened their earnings for the quarter, ” it told clients in a banking sector report yesterday, calling the overall results of lenders in the last quarter, a “mixed bag.”

The earnings of Malayan Banking Bhd

’s core earnings were below our forecast largely due to higher-than-expected allowances for credit losses, ” it noted, adding that CIMB also reported higher provisions on debt securities and derivatives exposure in which the latter was related to the aviation industry.

’s core cumulative earnings beat its estimates with better-than-expected NII and NOII while Bank Islam Malaysia Bhd’s earnings were above its projection on higher financing income and lower opex, ” it said.

As for AMMB Holdings Bhd

, the group’s underlying earnings were above consensus expectations, said AmInvestment.

In the same report, the research house also noted there was a slower pace of loan growth in the Q4 for most banks.

Regional banks like Maybank and CIMB continued to report subdued loan growth with Malaysia’s loan expansion offset by a contraction in international markets’ loans, it said.

“With the exception of CIMB and AMMB, the other banks registered stronger domestic loan growth in Q420 compared to the industry’s +3.4%, “ it said, adding that the industry’s loan growth was expected to be moderately higher at 4% to 5% this year.

AmInvestment also noted that all lenders reported improvements in interest margins in Q420, underpinned by lower cost of funds.

“This led to an improved NII for banks. We expect stable to modestly higher interest margins for banks in 2021 with no further rate cuts., “ it said, adding that it was maintaining its overnight policy rate projection for 2021 of 1.75%.