in early trade on Monday.

At Bursa last week, foreign funds were net buyers at RM285.8mil and local retail investors at RM304.6mil but local institutions were net sellers at -RM590.3mil.

On the outlook for the market this week, TA Securities Research said the economic recovery theme will continue to dictate the upward momentum in the local equity market this week with more drivers supporting the increasingly brighter outlook.

While most recovery plays in the banking, gaming, aviation and oil & gas sectors have been enjoying a steady rally since late January on vaccine optimism and may continue to garner strong interest due to their cheap valuation vis-à-vis their earnings growth potential, there should be some rotational interest into the undervalued property sector as well in the coming months.

“This is because most stocks in the sector are trading at CY22 Price-to-Book multiple of 0.2 times to 0.4 times only, which is about 40% to 60% discount to their last 5-year average.

“With the economic recovery it is just a matter of time for improved sales to translate into much higher earnings.

“In terms of sales performance, eight property players that are being tracked, including the bigger ones like SP Setia, Sime Darby Property

, IOI Property and Mah Sing, have witnessed aggregate sales increasing by 1.4% on-year and 19% on-quarter in fourth quarter of 2020.

“It was attributed to favourable policies and developers’ aggressive marketing and sales efforts, which are expected to gain momentum in 2021 and 2022, ” it said.

Asian shares rallied on Monday while the dollar held near three-month peaks after the U.S. Senate passage of a $1.9 trillion stimulus bill and a surprisingly strong payrolls report augured well for a global economic rebound, Reuters reported.

There was also upbeat news in Asia, as China's exports surged 155% in February compared with a year earlier when much of the economy shut down to fight the coronavirus.

Reuters also reported Brent crude futures jumped above $70 a barrel on Monday for the first time since the Covid-19 pandemic began, while U.S. crude touched its highest in more than two years, following reports of attacks on Saudi Arabian oil facilities. 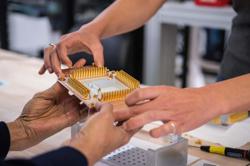