NEW YORK: Wall Street slumped on Thursday and global stock markets declined after U.S. Federal Reserve Chair Jerome Powell repeated his pledge to keep credit flowing until Americans are back to work, rebutting investors who have openly doubted he can stick to that promise once the pandemic passes.

Oil prices spiked to their highest in over a year as OPEC and its allies agreed to extend most oil output cuts into April, after deciding that the demand recovery from the pandemic remained fragile.

With COVID-19 vaccines rolling out and the government fiscal taps open "there is good reason to think we will make more progress soon" toward the Fed's goals of maximum employment and 2% sustained inflation, Powell told a Wall Street Journal forum.

But "even if that happens it will take substantial time," Powell added.

"This market has already been weak and was looking for another excuse to sell," said Dennis Dick, head of markets structure and a proprietary trader at Bright Trading LLC in Las Vegas, citing fear in equities markets for the past nine months. "Now, Powell gives them that excuse as well."

Powell said the increase was "notable" but he did not consider it a "disorderly" move, or one that pushed long-term rates so high the Fed might have to intervene to bring them down.

Benchmark 10-year notes last fell 21/32 in price to yield 1.5432%, from 1.47% late on Wednesday. They earlier touched their highest levels since a one-year high of 1.614% set last week on bets on a strong economic recovery aided by government stimulus and progress in vaccination programs.

The cost of borrowing U.S. Treasuries in the overnight repurchase agreement, or repo market, went negative on Thursday, analysts said, amid the bond market sell-off, which pointed to stress in money markets.

Many Fed officials have downplayed the rise in Treasury yields in recent days, although Fed Governor Lael Brainard on Tuesday acknowledged that concerns over the possibility of a rapid rise in yields could dampen economic activity.

The dollar surged to three-month highs after Powell failed to express concern about a recent sell-off in U.S. Treasuries as some traders had expected, resulting in higher bond yields and demand for the greenback.

The U.S. Senate voted on Thursday to take up President Joe Biden's $1.9 trillion coronavirus aid bill, setting up what is likely to be a days-long debate. 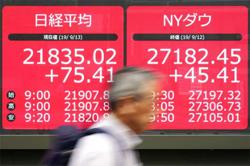