“I was optimistic two weeks ago, but what I learned the last couple weeks is the extent of the end market demand, ” Stelco chief executive officer (CEO) Alan Kestenbaum said in a phone interview.

“It’s there, and I think we’re going to see a historic rebound here as people get out and start living again.”

It’s a more exuberant tone for the CEO of the Hamilton, Ontario-based steelmaker, who was already upbeat about demand during the company’s Feb 18 earnings call. Kestenbaum credits his revised outlook to better visibility on upcoming United States car sales and a pickup in oil drilling.

Automobile sales will start surging in the third quarter, with the rally in full swing in the last three months of the year as North Americans begin returning to normal life after the rollout of Covid-19 vaccines, according to the CEO.

He anticipates auto sales rising to the low- to mid-20 million range for 2022 – more optimistic than recent industry estimates of around 17 million vehicles.

Pipe inventories are dropping and Stelco is starting to get “a big inflow of orders” now from energy companies, just as rig counts perk up.

The CEO also said he’s getting calls from Brazilian steelmakers asking for quotes on pig iron, a lower-quality iron ore substitute used in the steelmaking process.

That indicates a general strength in demand across the sector, he said.

The rally has also come with some lumps as the cost of raw materials to make steel are on the rise. Iron ore futures are holding near all-time highs, while steel scrap prices in the US remain elevated after about a 60% gain last year.

Steel Dynamics Inc CEO Mark Millett said in a phone interview that he expects scrap prices to gain another US$40 to US$60 in March, given recent surges in global demand.

Analysts expect scrap prices to remain elevated as more of these type of plants come online in the US this year and as China’s decision to lift a ban on scrap imports may increase demand in the world’s largest steel producer.

Kestenbaum, whose integrated steel mill model requires iron ore as its main feedstock, said the electric arc furnaces could face a supply issue that his company won’t. But this still points in one direction: demand globally is stellar, and every steelmaker is in need of raw materials.

“To be honest, we’ve been trying to control order intake because it has been so strong across the board, ” Millett said. “We believe the market has a long runway to go.” ─ Bloomberg 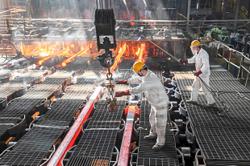