Overnight on Wall Street, stocks retreated and investors took stock of gains from Monday's surge, pausing to gauge whether a bond yield jump had run its course.

Meanwhile, oil prices fell to their lowest in two weeks on Tuesday on expectations Opec+ producers will ease supply curbs at their meeting later this week as economies start to recover from the coronavirus crisis.

AmBank, which resumed trading after a two-day voluntary suspension, fell 37 sen to RM2.79. Hong Leong Cap was down 14 sen to RM6. 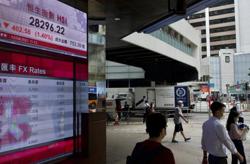