SINGAPORE: CapitaLand Ltd, Singapore’s largest developer, posted a record full-year loss after writing down the value of some investment properties and residential projects during the pandemic.

Revaluation and impairment costs totaled S$2.5 billion, the company said in a statement.

Singapore’s developers are still reeling from the health crisis, which has battered the property market, particularly office and hospitality assets. Still, chief executive officer Lee Chee Koon struck an optimistic tone, saying the worst is over as Covid-19 infections show signs of falling in key markets.

“We are quietly confident, ” Lee said at a virtual briefing on the results. Business partners are “talking about investing for the future.”

He singled out Singapore and China, where CapitaLand has major exposure. “The two countries have managed the crisis relatively a lot better than other markets, ” Lee said.

It’s been a tough year for Singapore developers. Prime grade office rents in the Raffles Place and Marina Bay precincts declined about 10% in 2020, and early termination of leases continued to rise in the fourth quarter.

Citigroup Inc and Mizuho Financial Group Inc are among financial firms that have cut office space in the city-state, in part due to the success of working from home. — Bloomberg

For CapitaLand, the overall committed office occupancy rate in Singapore stood at 85% as of Dec. 31. As of Oct. 16 last year, 43% of the office community under its portfolio had returned to the workplace.

Revenue for the year rose 4.8% to S$6.5 billion, the developer said. Operating profit after tax and minority interests fell 27% to S$770 million.

Shares of CapitaLand rose 0.3% in Singapore trading, paring this year’s decline to 4.6%.

While the pandemic has been disruptive, it won’t change the firm’s plans to become a “globally competitive asset manager and real estate company, ” Lee said earlier in a statement.

With a global portfolio worth about S$132.5 billion as of Dec. 31, the developer sees Singapore and China as its core markets but has been expanding in places such as India, Australia, Europe and the U.S.

CapitaLand’s “strong balance sheet and cashflow position tide us through the ongoing Covid-19 pandemic, ” Lee said. “We will be able to capitalize on new opportunities to further transform our business.” 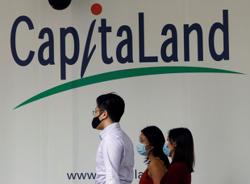