Despite the challenging year, Maybank recorded a stable net operating income, up by 0.1% at RM24.76 bil from a year earlier.

posted net profit of RM6.48bil in the financial year ended Dec 31,2020 compared with RM8.20bil a year ago due to higher impairment losses due to the continued impact from the Covid-19 pandemic.

Despite the challenging year, Maybank recorded a stable net operating income, up by 0.1% at RM24.76 bil from a year earlier.

“This was attributable to a 12.3% year-on-year (Y-o-Y) increase in total net fee based income to RM8.11bil, which came mainly on the back of higher net insurance and investment income as the group also took the opportunity to realise selected one-off gains from the better returns available, ” it said.

The board of directors proposed a final single-tier dividend of 38.5 sen per share, comprising an electable portion of 21 sen per share under its dividend reinvestment plan. Maybank chairman Tan Sri Zamzamzairani Mohd Isa (pic,above) said that notwithstanding the challenges presented by the Covid-19 pandemic, the group had been able to demonstrate its resilience and ability to remain agile in managing the unprecedented risks and disruptions.

“Our key priority moving forward will be to continue focusing on our financial sustainability and creating value for the millions of our stakeholders.

“The group will soon launch our M25 Plan which will set out our roadmap and strategic objectives for the next five years to drive us to the next level and accelerate our growth trajectory. We are confident that this plan will steer the group in navigating a new world order and building an even stronger franchise in this region.”

Meanwhile, Maybank group president and CEO, Datuk Abdul Farid Alias said the Group’s performance was underpinned by its diversified operations and focus on ensuring a robust liquidity and capital base.

“Although we expect the environment to remain challenging for the medium term, we are hopeful that economic momentum will be lifted once the vaccination campaigns are rolled out more comprehensively.

“The group remains committed to adhering to the fundamentals of sound banking practices and prudent management on which our foundation was built, while at the same time seeking new revenue-generating opportunities and leveraging our technological capabilities to produce world class products and services.

“We have in the pipeline, several exciting digital initiatives designed to deliver next generation customer experience, which will be rolled out to our customers this year, ” he said. 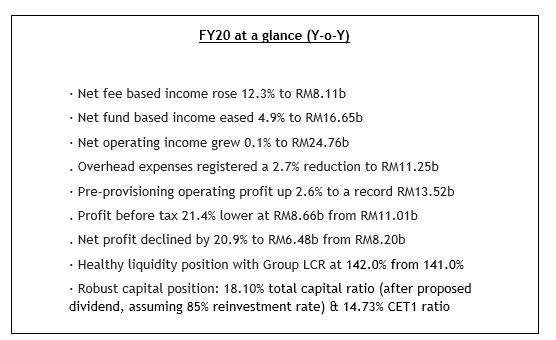 On the financial results, Maybank said the rise in net fee based income in FY20 was partially offset by a 4.9% decline in total net fund based income to RM16.65bil.

It attributed this mainly as a result of a 17 basis points (bps) Y-o-Y net interest margin compression due to lower loans and security yields.

Other factors included the net impact from the four cuts in Overnight Policy Rate totaling 125bps and the fixed-rate financing modification loss from the six-month blanket moratorium granted to customers.

However, the group’s continued focus on disciplined management of costs also helped mitigate the impact from the weaker operating environment, resulting in overhead costs maintaining its downward trend to RM11.25bil or 2.7% lower than the RM11.56 billion in FY19.

This resulted in the Group’s cost-to-income ratio improving further to 45.4% from 46.7% a year earlier.

Given the higher operating income and lower overhead costs, pre-provisioning operating profit (PPOP) came in 2.6% higher than in FY19 to reach a record RM13.52bil.

Maybank also pointed out it continued to adopt a conservative stance and undertake proactive provisioning due to rating deterioration in selected portfolios as well as increase management overlay for specific business and corporate borrowers in markets displaying weakness and some retail portfolios.

These measures saw net impairment losses rising to RM5.07bil in FY20 compared with RM2.32bil a year ago, which impacted overall net earnings for the year.

Consequently, PPOP dipped 2.9% to RM3.42bil compared with a year ago.

Coupled with significantly higher net impairment losses of RM1.50bil from RM298.9mil a year earlier, profit before tax for the quarter declined by 39% to RM1.99bil from RM3.26bil in 4QFY19.