GameStop shares were up 60% after hours at around $146, following a 103% rise during the day's trading. Trading in GameStop was halted several times following a rally that began around 2:30 pm Eastern time Wednesday with no obvious catalyst.

NEW YORK: GameStop Corp shares more than doubled in afternoon trading on Wednesday, surprising those who thought the video game retailer's stock price would stabilize after recent hearings in the U.S. Congress prompted by the fierce rally and steep dive that upended Wall Street in January.

Trading in GameStop was halted several times following a rally that began around 2:30 pm Eastern time Wednesday with no obvious catalyst.

Analysts that follow the stock could not point to one single reason for the sharp move, offering reasons that included a corporate reshuffle.

"GameStop announced the resignation of its CFO last night. Some may have taken this as a good sign that RC Ventures is making a difference at the company in terms of trying to accelerate the shift to digital," said Joseph Feldman, an analyst at Telsey Advisory Group.

Stephanie Wissink, analyst at Jefferies Research declined to comment on the afternoon stock spike but referred to her research report following the CFO resignation. Wissink said it did not seem like a coincidence that the CFO resigned after the company settled with activist investor Ryan Cohen's RC Ventures.

"We expect GME to pursue a CFO with a more extensive tech (vs. retail) background, which will be a signal of the direction the company is due to take in coming years," Wissink wrote in her note.

"Why is GME going back up. is it Melvin covering?!," one user wrote https://www.reddit.com/r/wallstreetbets/comments/lra5cg/daily_discussion_thread_for_february_24_2021.

In January, shares of GameStop soared more than 1,600% as retail investors bought shares to punish hedge funds such as Melvin Capital that had taken outsized bets against the company. Melvin Capital said it lost 53% before closing its position in GameStop.

The retail trading frenzy was the subject of hearings in Washington last week, where Keith Gill, a Reddit user and YouTube streamer known as Roaring Kitty who had boosted the stock with his videos, reiterated that he was a fan of the stock. 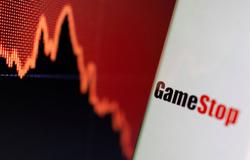