SUKE begins in Sri Petaling and ends in Ulu Kelang at the MRR2 that connects major highways such as DUKE, AKLEH, KL-Seremban Highway, Cheras-Kajang Highway, BESRAYA Highway, and KESAS Highway.

KUALA LUMPUR: The Sungai Besi-Ulu Kelang Elevated Expressway (SUKE) construction work has recorded an overall progress of 87 per cent as at end-2020, supported by full completion of the CB3 package.

“Construction of the 2.7-kilometre (km) CB3 package passing through the Ampang Waterfront next to Bandar Baru Ampang, and ends at Jalan Merbau near the Ampang LRT station has taken about four years and completed ahead from the initial schedule, ” he said in a statement yesterday.

“Road users heading to the Kuala Lumpur city centre only need to use the Kosas Interchange or the next Ampang Interchange via the Ampang-Kuala Lumpur Elevated Highway (AKLEH), and the expressway (SUKE) provides an alternative route to avoid traffic congestion along Jalan Ampang."

He said Jalan Ampang has been upgraded parallel with the SUKE structure, from two lanes to three lanes.

Construction of the 24.4km SUKE Highway began on Aug 29,2016 and upon completion, it is expected to reduce traffic congestion by at least 30 per cent on the Middle Ring Road 2 (MRR2) and in high-density areas such as Cheras, Pandan Indah and Ampang. 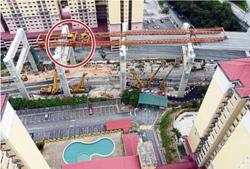