NEW YORK: New York City’s beleaguered restaurant industry finally has something to cheer about after its first weekend of indoor dining this year.

The number of seated diners at restaurants on Sunday, which coincided with Valentine’s Day, fell about 56% from the corresponding Sunday a year earlier, the smallest decline since the pandemic-induced lockdowns began mid-March, according to data from OpenTable.

The reservation site tracks more than 54,000 restaurants and its data capture online and phone reservations as well as walk-in customers.

Some eateries said serving indoors at 25% capacity this Valentine’s Day weekend was worthwhile and, in the case of Chez Josephine in the Broadway theater district, even profitable.

Others said they wouldn’t bother. Deborah Williamson, the co-owner of James in Brooklyn, said she didn’t feel safe serving guests indoors and restrictions would only allow for 10 seats in her dining room.

Some 110,000 restaurants nationwide have closed permanently, or for the long term since the pandemic took hold, with more than 4,000 closures in New York City alone, according to the New York State Restaurant Association. Many of the city’s restaurateurs are lobbying Washington for US$25bil in federal aid for restaurants and small businesses.

At Chez Josephine, manager Alfredo Villegas said all the tables at his restaurant were taken on Saturday. “It’s been going well, ” he said in a phone interview, adding that the restaurant now operates with 15 tables under the capacity rule. “People have been very happy about it.”

The manager of Pipin’s Pub, a bar in Bay Bridge, Brooklyn, said indoor dining revenue even surpassed takeout and delivery this weekend. “A lot of the regulars have been back, ” Brid Kerr-Gnoza said.

Burger Village, which opened two-and-a-half months ago in Astoria, also filled up its seven indoor tables “a couple of times” over the weekend. ─ Bloomberg 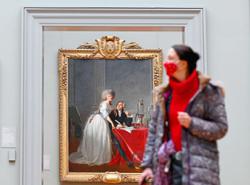