The upheaval in the wake of a report commissioned by the state gambling watchdog raised speculation among analysts that the A$6.6bil (US$5.1bil) company was in play as a takeover target.

The report cited Crown’s links to organised crime and the “dysfunctional” influence of Packer as it declared the company unsuitable to hold a gaming licence for the casino in its newly opened A$2.2bil Sydney waterfront resort tower.

The former judge who headed the inquiry, Patricia Bergin, recommended a 10% shareholding limit for all casino operators in New South Wales state, a condition that would require founder Packer to sell down his 36% stake.

Packer’s private company CPH said the departures of the executives, and the shift by a third director to independent status, would give Crown “clear air to work with (gaming regulator) ILGA in the execution of its announced reform agenda, and become a model casino operator”.

The CPH statement did not address Packer’s shareholding or plans.

Crown’s shares sank nearly 9% in early trading, compared with a slightly higher broader market, but clawed back some losses as speculation grew about the company’s takeover target prospects.

The shares were down around 3.5% in early afternoon trading.

“The transaction creates an opportunity for trade buyers or private equity to secure a meaningful stake from a forced seller, ” Citi analysts said in a note.

They added that increased regulatory scrutiny would mean “constrained revenue and elevated costs” for the company.

Crown has said it planned to work with the NSW Independent Liquor & Gaming Authority (ILGA) after the report indicated that a sweeping overhaul of its board and business could see its licence reinstated.

— ReutersThe company has not commented on the future of any other directors, including chief executive Ken Barton, who was heavily criticised in the report.

Crown was granted a gambling licence for the Sydney tower several years ago, but the ILGA suspended it last year pending the results of the year-long inquiry.

As well as rife money laundering, the inquiry heard about a management structure where Packer requested frequent trading updates despite holding no board or management position, while attempting to take the company private - without disclosing the arrangement to other shareholders.

“For any regulator and any government, they’re pretty scary terms, ” Crawford told reporters about the report’s finding the company had been infiltrated by organised crime. “They’ve got a lot of work to do to satisfy us.”

Crawford cited a newspaper headline which said Crown needed to “blow itself up to save itself” and added: “that’s probably pretty close to the mark.” -- Reuters 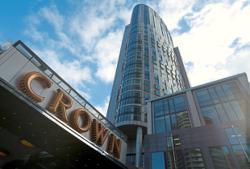 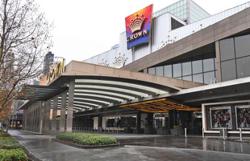