Insight - Recovery in an Ox-picious year ahead

I am told the year of the ox signals a period of recovery, volatility and hope, in the face of the Covid-19 pandemic and its ensuing disruptions. This year, February is unique in that: every weekday in 2021 is repeated four times (four Mondays; four Tuesdays, etc) – a miracle. It won’t happen again in my lifetime – only once in every 823 years and CNY falls on 120221 – when read backwards, it’s the same like ‘madam’. (Dough Figurine artist David Loh, 50 making his Covid-19 Chinese New Year- ox themed dough fingurines at his home in Paya Terubong, Penang. ( February 7,2020 ).

BEFORE you know it, it’s Chinese New Year (CNY) time – starting on Friday (first day of the new lunar ‘metal ox’ year). The time of the year for the rabbit (that’s me) to stay securely on top of the stubborn ox, through “hard work and improving endurance” (so says ‘my stars’).

Hard work is the hall-mark of Chinese inheritance. It’s characterised by the ox, working hard in the fields 24/7 to ensure families are well-fed, and have enough surplus to create wealth and happiness.

I am told the year of the ox signals a period of recovery, volatility and hope, in the face of the Covid-19 pandemic and its ensuing disruptions.

This year, February is unique in that: every weekday in 2021 is repeated four times (four Mondays; four Tuesdays, etc) – a miracle.

It’s a palindrome. Such an Ox-picious date won’t recur. So, that’s why this February is special.

Overall, the state of the world economy looks reasonable enough. Activities are improving and inflation, kept at bay.

As to be expected, emerging Asia (in particular China and India) is driving world growth and world trade. Asia is where the action is.

Following a sharp rebound of economic activity in Q3’20, the pace of the recovery has moderated in recent months, with the weakness concentrated in the sectors of the economy most adversely affected by the resurgence of the Covid-19 virus, and by greater social distancing.

Central bankers hope the setback is temporary and have signalled they have no intention of pulling back from their easy policies, until the economy-and in particular the job market, recovers.

Many expect the global economy to bounce back later this year, as vaccines are more widely-distributed and begin to bring the deadly coronavirus pandemic under control. This would allow restaurants, hotels, airlines and other businesses, including SMEs, to begin moving back toward operating at full capacity. 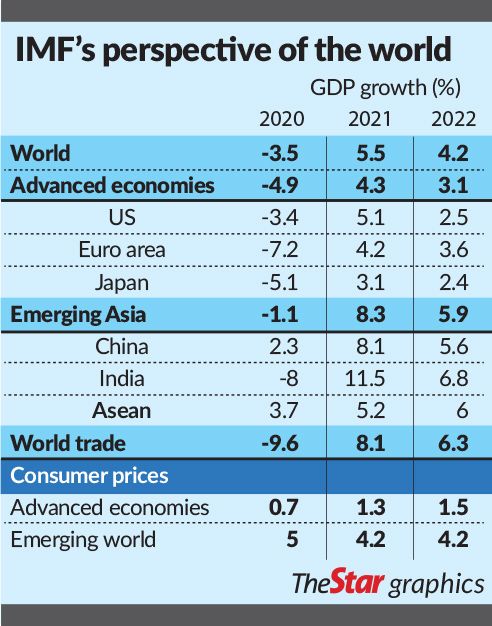 In addition to keep interest rates low, the US Congress has approved several rounds of spending and direct payments to households and businesses (totally more than US$6 trillion, about 25% of GDP), with more likely on the way-to help households and businesses weather the downturn, as well as limit lasting damage to the economy that could otherwise impede the recovery.

China was the only major economy to grow last year, expanding by 2.3% amid effective containment measures and forceful economic support.

The global outlook has been buoyed by hopes for increasing vaccination and improved therapies to combat Covid-19, which sparked widespread economic lockdowns last year.

It assumes “broad vaccine availability in advanced economies and some emerging market economies in summer 2021, and across most countries by the second half of 2022.”

Still, there remains tremendous uncertainty, and prospects vary greatly across countries. Continued government spending measures in Japan and US contributed to the improved forecasts. The US economy is expected to grow 5.1% this year, China 8.1%, and Japan’s to expand 3.1%.

Since the start of the pandemic, European policies have sought to balance saving lives and supporting businesses, but have generally pursued more draconian restrictions to stop the virus spread than has the United States.

Nonetheless, the death toll in Europe is approaching that of the United States, while its economic performance-already lagging behind the United States before the pandemic, has been much worse than other advanced economies.

IMF has since lowered its growth forecast for the eurozone to 4.2% in 2021.

Indeed, some economists expect the area might even re-enter recession in the course of 2021.

The eurozone will be the last major economy to return to pre-pandemic levels, and will suffer continued substantial output gaps for at least the next two years.

The IMF expects the eurozone economy to end this year 3.3% points smaller than it was at the start of 2020 and the US economy will be 1.5% larger.

Domestic demand is already a major pillar of China’s economic growth, contributing 89% of the nation’s GDP in 2019. It needs to further unleash the potential of China’s huge market to ensure medium-speed economic growth.

China’s per capita GDP exceeds US$10,000, and its middle-income population has reached about 400 million.

It has the world’s largest consumer market, with great potential to improve the level of domestic consumption and adopt modern technologies and production modes to upgrade the quality of consumption.

Online and offline businesses and the expansion of services will become new driving forces for consumption, including in healthcare, elderly care, childcare, cultural tourism and sports.

The potential of rural consumer markets can also be further tapped. Investment demand is also important.

The CNY is also “hóng bào” (red packet) time: when kids (including unmarried adults) receive small red-packets (containing token sums of cash) for good luck, from married adults. It’s is age-old tradition which all Chinese take for granted. This has not changed. But the nature of money has.

Central banks today (including Bank Negara) are debating whether they need to change with it. As electronic payments take off and private cryptocurrencies (such as bitcoin or Facebook’s libra) seek to gain traction, governments are exploring whether to issue digital versions of their national currencies, that could be used as a universal form of payment in the way physical cash is today.

Will the United States commit to such a project? As I see it, a digital dollar managed on a single network would facilitate faster, cheaper payments and protect the Fed’s ability to conduct monetary policy in a changing world. But Fed-controlled digital currency would be costlier and less efficient, and it would harm privacy by giving government the ability to track all dollar spending.

However, it could help pave the way for faster, cheaper and more secure payments by allowing consumers to hold central-bank-issued digital currency outside of commercial banks. Using this e-cash (connected to a single network operated and maintained by the Federal Reserve), would be as fast and easy to send money to someone across the world as it is to text them photos today.

Indeed, it offers such a payment protocol as a service at cost; the Fed could provide accounts directly to consumers and businesses, in much the same way as banks do; a carefully designed Fed-issued digital currency would be implemented and regulated to reduce the risk of fraud and protect privacy.

According to BIS, 30% of central banks are likely to launch a digital currency in the next six years, and 10% have pilots in place. Furthermore, a Fed retail-account system raises serious concerns about privacy because the government would be able to track where every dollar goes.

However, giving government this ability and eliminating the anonymity provided by physical cash today, can be hazardous. Unlike private firms that encrypt customer data, the Fed as an arm of the federal government can’t be expected to protect users from surveillance.

Finally, moving retail accounts to the Fed would diminish funds in commercial banks, shrinking the volume of growth-enhancing small-business loans they make. But given recent history, the Fed can’t be expected to maintain a fair neutrality in credit allocation. Government has a poor record on efficiency. So, it will be a while before the “hóng bào” can be filled with our own national digital currency, e-ringgit.

Former banker, Harvard educated economist and British chartered scientist, Prof Lin of Sunway University is the author of ‘Trying Troubled Times Amid Trauma & Tumult, 2017-2019’ (Pearson, 2019). Feedback is most welcome. The views expressed here are the writer’s own.