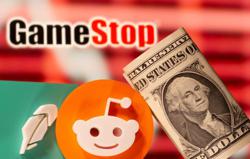 Short-term volatility: A man walks past a GameStop store in New York. Several market analysts say the GameStop effect may be no more than a blip on the radar screen in the longer term. ─ Reuters

NEW YORK: As the trading frenzy in GameStop Corp shares and other social media favourites recedes, investors are eyeing signs of potential market stress that could weigh on broader stock performance in coming weeks.

For now, US equities appear to be looking past last week’s surge in volatility that led the S&P 500 to its biggest weekly decline since October. Solid earnings, fiscal stimulus expectations and progress in country-wide vaccination efforts are leading stocks back to all-time highs.

The S&P 500 and Nasdaq posted records for a second straight session on Friday.

Some investors, however, worry that the wild swings in GameStop and other “meme stocks” may have exacerbated concerns over market volatility and elevated valuations that could make market participants more risk-averse. The S&P 500 stands near its highest forward price-to-earnings ratio in about two decades after rallying 74% from its March lows.

Liquidity in futures on the S&P 500 dried up as market makers and other investors sought to reduce risk during the GameStop surge, according to BofA analysts. Earlier this week “market fragility, ” as measured by the bank, stood at its highest level since March 2020, making US equities exceptionally vulnerable to sudden market shocks, the firm said.

Moves in the Cboe Volatility Index, known as Wall Street’s “fear gauge, ” also indicate that investors may be more sensitive to market turbulence than usual. On Jan 27 the index surged 14 points, its biggest one-day gain since March, as the S&P 500 lost 2.6%.

The fear gauge’s climb was eight to 10 points greater than the expected move following such a drop in the S&P 500, according to Stuart Kaiser, strategist at UBS. The outsized reaction, he said, pointed to heightened jitters among investors that could suggest bigger market sell-offs in response to negative developments.

The VIX has since reverted to its lowest level since early December as US equities have rallied this week. Even so, “I wouldn’t say we’re completely past it yet, ” Kaiser said.

Next week, investors will focus on quarterly corporate results from Cisco Systems Inc, General Motors Co and Walt Disney Co as well as data on US consumer prices.

Options markets have not flashed the green light to go full speed ahead with resuming risk.

Investor demand for calls on the S&P 500, used to position for gains in the index, has jumped after plummeting to a multi-decade low earlier in the week, according to Charlie McElligott, managing director, cross-asset macro strategy at Nomura. The swing in demand points to risk of a pullback and choppy trade in the next few weeks, he said.

Longer-term, several market analysts say the GameStop effect may be no more than a blip on the radar screen for markets as a whole. Drops in the VIX of 20% or more to below 25 tend to bode well for stocks, with the S&P 500 rising 2.6% a month later, according to Christopher Murphy, co-head of derivatives strategy at Susquehanna Financial Group.

Still, the exuberance that magnified the market’s fault lines has not completely faded. According to data from Trade Alert, options activity shows heavy demand for upside calls in the SPDR S&P Retail ETF, which includes GameStop, and the iShares Silver Trust, which was also rocked by retail trading.

As a result, some investors say they plan to tread cautiously for the time being, especially if they are exposed to passive funds that hold a large number of small-cap stocks that could be sensitive to a sudden retail frenzy.

“Time will tell whether this has a more lasting effect on the market, ” said Matt Forester, chief investment officer of BNY Mellon’s Lockwood Advisors. “We need to police our holdings to make sure we’re not overly exposed to these trends.” ─ Reuters 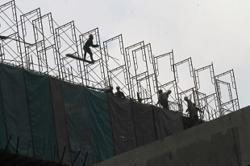