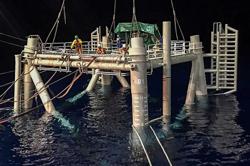 Worldwide coronavirus cases surpassed 90 million, according to a Reuters tally.

Despite strict national lockdowns, Britain is facing the worst weeks of the pandemic, and in Germany cases are still rising.

Mainland China saw its biggest daily increase in virus infections in more than five months, authorities said, as new infections rose in Hebei, which surrounds the capital, Beijing. In Shijiazhuang, the provincial capital and epicentre of the new outbreak, people and vehicles are barred from leaving, as authorities seek to rein in the spread.

A stronger dollar, supported by hopes for more stimulus to boost the world's largest economy, also weighed on oil prices. Oil is usually priced in dollars, so a stronger dollar makes crude more expensive for buyers with other currencies.

Monday's losses follow a strong week for oil prices. Brent and WTI rose around 8% last week, supported by Saudi Arabia's pledge for a voluntary oil output cut of 1 million barrels per day (bpd) in February and March as part of a deal for most OPEC+ producers to hold production steady.

"Although oil prices are declining today, the Saudi move is still keeping them at quite high levels," said Bjornar Tonhaugen, Rystad Energy's head of oil markets. "Today the correction is not massive, rather a logical adjustment caused by some bearish demand signals and by a strengthening U.S. dollar."

The Saudi cut is expected to bring the oil market into deficit for most of 2021 even though lockdowns are hitting demand, analysts said.

Brent could rise to $65 per barrel by summer 2021, Goldman Sachs said, driven by Saudi cuts and the implications of a shift in power to the Democrats in the United States.