KUCHING: The federal government will commence construction works for Sarawak portion of the Pan Borneo Highway phase two project in the northern region this year.

According to Senior Works Minister Datuk Seri Fadillah Yusof, (pic) phase two of the project would stretch from Miri to Lawas, in Sarawak.

From Lawas, it will connect to Limbang, Marudi and several other areas. Phase two is expected to cover a few hundred kilometers, he said during a recent meet-and-greet state media editors here.

The Pan Borneo Highway project is the biggest and most ambitious infrastructure project in Sarawak. It is a road network on Borneo island connecting Sabah and Sarawak with Brunei and Kalimantan in Indonesia. Phase one covers 786km from Sematan in southern Sarawak to Miri.

Phase one, which costs some RM16bil, was awarded in 12 work packages, mainly to leading construction firms in Sarawak and Peninsula Malaysia on a 70:30 joint venture basis in 2016.

Updating the progress of the first phase, Fadillah said it is 51% completed, but 11% behind the scheduled target of 62%.

He expected the project to achieve 70% completion rate by 2021, the original date for full completion.

The government expected phase one project to be completed in 2022 or early 2023.

The current overall work progress does not include the 33km Telok Melano-Sematan work package which was completed and open to traffic in early 2019. Also completed was the 43km Nyabau junction, in Bintulu, to Bakun.

Construction work for the project has been affected by the termination of the project delivery partner (PDP), Lebuhraya Borneo Utara Sdn Bhd, in 2019 by the previous Pakatan Harapan government.

The delay was further compounded by movement restrictions which came about as a result of the Covid-19 pandemic.

Restrictions in movement imposed by the government further affected the recruitment of foreign workers because the construction sector is heavily-dependent on migrant labourers.

Following the termination, the Public Works Department (JKR) took over the supervision of the mega project.

Fadillah said to expedite the project, a project management consultant would be appointed, probably this month. The consultant will be tasked to assist the JKR to monitor the project. The appointment is pending the final decision by the Finance Ministry.

He said the appointment of the consultant is justified because JKR Sarawak would not be able to cope with the sheer volume of work involved in order to complete the project.

On the Sabah portion of the Pan Borneo Highway project, Fadillah said progress was lagging behind by more than 30% from its original schedule.

Deputy Works Minister Datuk Eddin Syazlee Shith was reported as saying that the termination of the project delivery partner, changes to policies and re-tendering of several work packages had resulted in project delays in Sabah.

Fadillah gave the assurance that the federal government was committed to continuing implementation of the 15 work packages costing RM10.12bil under Sabah Pan Borneo portion. He said the government had also decided that his ministry, as the project owner and Sabah JKR, will ensure the project’s smooth implementation.

The federal government intends to delegate power to the Sabah Industrial Development Ministry to manage the project’s implementation. The ministry, together with the Finance Ministry and Economic Planning Unit, would discuss with the Sabah government to find ways to speed up the implementation of the project, and finalise its completion date. 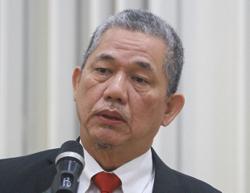