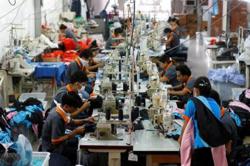 Challenging times: A tourist reacts among flowers in Phu Hin Rong Kla National Park, Phitsanulok province in Thailand. The central bank expects Thailand to welcome 5.5 million tourists in 2021 - down from an estimate of nine million as recently as September. — Reuters

BANGKOK: A tug-of-war is building for Thailand’s baht as concern about the nation’s virus outbreak counters the support from its current-account surplus.

Tailwinds for the baht are fading after it breached the key level of 30 per dollar as a jump in domestic infections weighs on economic growth. Traders are now trying to determine if the currency’s recent pullback is a pause en route to it testing the year’s high of 29.542 or the start of a weaker trend.

The baht’s reversal of fortunes illustrates how a rally in emerging Asian currencies risks unraveling as a relentless rise in infections worldwide clouds the outlook.

Still, if the baht’s gains fade, this will help boost Thailand’s exports and ease pressure on policy makers to intervene.

While the authorities have refrained from imposing a wider lockdown to stem an outbreak of infections in a coastal province, the outlook remains uncertain.

Last week, the Bank of Thailand lowered its forecast for next year’s economic growth to 3.2% growth from 3.6%, saying the estimate “has high risks, depending on the Covid-19 outbreak and vaccine.”

Tourism, a key engine of growth, may remain weak. The central bank expects Thailand to welcome 5.5 million tourists in 2021 – down from an estimate of nine million as recently as September – and 23 million in 2022. That’s well below the 40 million figure from 2019.

The baht has fallen slightly since reaching an 11-month high in December and traded at around 30.01 on Friday.

But, the picture isn’t all grim. The nation’s current-account surplus has provided a buffer for the baht as the economy reels from the slump in tourism and trade.

A report due tomorrow is forecast to show the excess narrowed to US$610mil in November from US$985mil the previous month, according to a Bloomberg survey.

The surplus may get a boost when Covid-19 vaccines come online as a resumption in travel lifts Thailand’s tourism sector.

The dollar’s direction is also key for the baht.

“As the new US administration takes office, we will pay attention to the outlook for monetary and fiscal policies in the US, which will set the tone for the dollar, ” said Irene Cheung, a foreign-exchange strategist at Australia & New Zealand Banking Group Ltd. in Singapore.