Boon or bane: As the HSR track will end in Bukit Chagar which connects to the RTS that leads to Woodlands, a source says commuters may opt for low-cost direct flights from Kuala Lumpur to Singapore.

AMONG the mega projects that Malaysia has, the Kuala Lumpur-Singapore High Speed Rail (HSR) has gone through many backs-and-forths.

The two-year deferral for the 350km project ends in 12 days and latest developments seem to point at Malaysia going at it alone.

A recent report states that Malaysia will have to pay its southern counterpart a compensation of RM300mil since it is now no longer part of the plan.

This begs the question if it is economically viable for Malaysia to proceed with the project now that the track is proposed to end in Johor Baru.

With the end point of Jurong East out of the picture, an analyst says the return on investment which would have been 30 years could go up to 60 years or more.

“Financially, it may not be wise. It’s either we go all the way to Singapore or we don’t do it. Between Kuala Lumpur and Singapore, we’re talking about a 40,000 daily ridership if we’re being optimistic. 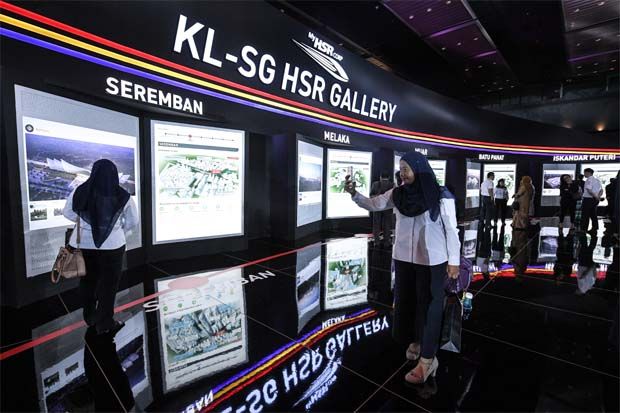 Analysts are debating if there is a need for it

“Before we talk about revenue, if it’s from Kuala Lumpur to Johor, where is the ridership going to come from?” asks the source.

As the track would end in Bukit Chagar, Johor Baru which connects to the planned Rapid Transit System (RTS) that leads to Woodlands, the source question if commuters are willing to go through the hassle with the availability of low-cost direct flights from Kuala Lumpur to Singapore.

“Previously, we thought the HSR was going to cannibalise air travel. If the end point is in Johor, it will cannibalised by air travel.

“Either way, it is not something we need at this point in time. We have double tracking which can be improved and that would suffice for a country of our size.

“The HSR would be a duplication of infrastructure where the touchpoints are very similar.

“Do we need a fast train costing us billions that will only save us an hour or so in travel time? The tremendous cost just doesn’t add up, ” the source says.

Another viewpoint is the post-Covid-19 world and the rise of other countries in the region which questions the need to link Malaysia and Singapore economies.

There is a need for Malaysia to protect whatever competitive advantages that it has.

Singapore has been getting a lot of wins and it has always been a direct competitor of Malaysia as far as investments are concerned.

With Singapore’s plans to develop Jurong East as the new central business district, the initial plans of having the HSR station terminate there would better serve its purpose of developing that area, which in turn, adds another layer of competition for Malaysia.

Another consideration is also the brain drain from Malaysia to Singapore, mainly due to its stronger currency.

In a report earlier this week, RHB Research says the number of travellers between Kuala Lumpur and Singapore would increase significantly over the longer run, given that the latter is an international financial hub.

“If the HSR is to end at Bukit Chagar, the spillover effect will not be that material but there will still be overall positive especially for the stations in between the two terminals.

“Local business and weekend travellers from Singapore will be key contributors to the ridership, ” it says.

While nothing is concrete until there is an announcement by the government, the research house says selective property counters will likely see trading opportunities ahead.

for its massive land bank in Labu and Pagoh, IOI Properties Group Bhd

It adds that companies with large land banks in Iskandar may also benefit over the long-term due to the materialisation of the RTS, which will be completed earlier in 2025 to 2026 as compared with the HSR.

There have been no indication on the cost of the project but figures that have previously surfaced were between RM68bil and RM110bil.

The higher figure allegedly included hidden costs that had not been revealed when Barisan Nasional was in power.

It inked the bilateral agreement with Singapore in December 2016 to build the 350km high-speed railway but the project was temporarily suspended in May when Pakatan Harapan came into power, citing high costs.

Malaysia’s political turmoil led to the collapse of Pakatan in February and sentiment on the ground was tilted towards the revival of scrapped mega-projects, including the KL-Singapore HSR.

This was cemented further when MyHSR Corp Sdn Bhd launched two tenders in August to appoint consultants for the project to assist with regulatory submissions to the relevant authorities.

As the deadline draws closer, the government is expected to state its stand soon, if there would be amendments to the plan or possibly arrange for a further extension to the deadline, taking into consideration the aftermath of the Covid-19 pandemic.

Sources familiar with the ongoing progress decline to commit to any possibilities, saying the matter is still being deliberated with Singapore.