MALAYSIAN Resources Corp Bhd made a challenge to the immediate resistance yesterday as it attempted to resume an uptrend.

The stock has been on an ascending trend since early November, and after a period of consolidation in the earlier half of December, the stock is showing signs of resuming its upward movement.

Coupled with an increase in the trading volume, the stock took on positive momentum which brought the slow-stochastic to 49 points near the mid-line and the 14-day RSI to 65 points.

Past the immediate resistance, the stock is seeing a higher price target of 57 sen. 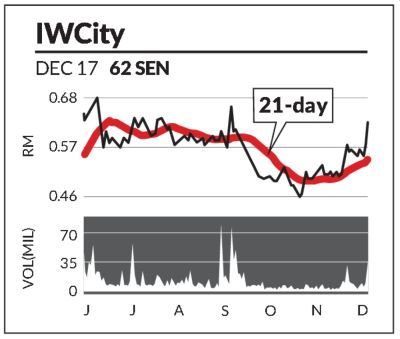 experienced a surge in buying interest yesterday, which saw the counter break free of consolidation pressure.With trading volume hitting its highest since mid-September, it appears that a buying catalyst has renewed interest in the counter.

Putting some distance to the key simple moving averages (SMA), the stock looks poised to reach for a previous high of 67.5 sen.

There was a sharp escalation in the slow-stochastic to 61 points. The relative strength index (RSI) has risen into overbought territory at 79 points but remains on an ascending trajectory. At the lower end of the chart, support is found at 54 sen and 50 sen. 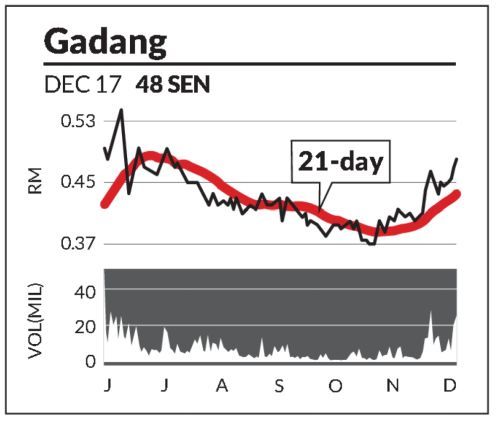 sustained its rally for a third straight day yesterday to affirm the continuation of its recovery.Based on the daily price chart, the share price is experiencing a lift from the short-term 14- and 21-day SMAs and should soon arrive at a resistance of 50.5 sen. Past this point, the stock is aiming for a higher price target of 55.5 sen.

The slow-stochastic is looking bullish at 71 points, while the RSI has entered overbought conditions at 78 points. Nevertheless, the stock looks set to continue on its upward trajectory.