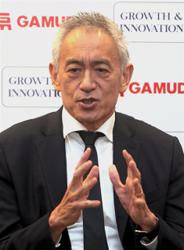 Group managing director Datuk Lin Yun Ling is confident of obtaining half of the orderbook worth RM5bil deriving from the Penang state government’s reclamation plans.

is targeting to secure at least RM10bil worth of order book for next year stemming from the Penang island reclamation and Australian rail projects.

Group managing director Datuk Lin Yun Ling is confident of obtaining half of the orderbook worth RM5bil deriving from the Penang state government’s reclamation plans.

“Over the last two years, foreign direct investment (FDI) related to electrical and electronics (E&E) has been increasingly strong and is the key economic engine for Penang. But Bayan Lepas has run out of land.

“The planned Island A for reclamation is next to Bayan Lepas which has been aimed for by a lot of investors due to the strong E&E ecosystem and highly-skilled workforce.

“Once the reclaimed land is available, it will attract FDI worth RM200bil to flow into the country and this will create 300,000 new jobs for the next 20 years, ” he said during a media briefing.

As such, the group is looking forward to the Penang state government making a decision about the commencement of the project by end-December or latest by next year.

In July 2020, the government confirmed the appointment of Gamuda as the project delivery partner (PDP) for the Penang Transport Master Plan.

Among other key works for the project, Gamuda would oversee the creation and formation of Island A under the Penang South Reclamation project.

Besides that, the developer has also tendered for three railway-related packages in Australia worth A$6bil (RM18.1bil), of which the group is bidding for two packages from the Sydney Metro West tunnel project and one package from the M6 Stage1 Highway.

“For both projects, Gamuda and its joint-venture partners have been shortlisted and approved to bid for the project, ” pointed out Lin.

He is hopeful of accomplishing some orderbook from the Australian market, with an aim to secure at least one package worth A$2bil (RM6.04bil).

To boost the economic recovery in Australia, Lin pointed out that the Australian government has earmarked over A$100bil worth of infrastructure projects, especially railway-related projects.

He said the Malaysian government should follow the same path of introducing fiscal stimulus in needed infrastructure projects as it would create more jobs in the country.

As announced in Budget 2021, construction outfits like Gamuda are set to greatly benefit from the continuation of mega-public infra projects such as the mass rapid transit three (MRT3) and the Kuala Lumpur-Singapore high-speed rail (HSR).

However, Lin noted that the revival of these projects was only a “one-line mention” in the recent budget, saying that the group is waiting for the government to outline a clear plan for the projects.

For the MRT 3 project, Lin believes that it is “quite shovel-ready”, awaiting the government to do the land acquisition.

Despite the disruption of work during the movement control order (MCO), Lin said the group is on track to complete phase 1 of the MRT2-Sungai Buloh-Serdang-Putrajaya line project by June next year.

“We are not looking at any extension of time despite the MCO over the last few months, ” he added.

Moving forward, Lin believes that the slowdown in group’s sales could continue until June 2021 due to the Covid-19 pandemic, pointing out that vaccines’ availability could change the business environment.