S.Korea revised Q3 GDP up 2.1%, ticks up from advanced estimates

SEOUL: South Korea's economy expanded by a seasonally adjusted 2.1% in the July-September period from the previous quarter, revised central bank data showed on Tuesday, notches above the 1.9% growth estimated earlier.

A 16% surge in exports in the third quarter towed the growth, the best reading since 1986 and reversing a 16.1% contraction in the second quarter.

The nation's central bank on Thursday raised its economic projections for this year and next, citing better-than-expected export growth.

In year-on-year terms, South Korea's GDP fell a revised 1.1% during the September quarter, compared to with 1.3% decline estimated earlier. 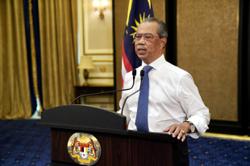