Singapore’s office market is likely in one of the best positions globally.(File pic shows office buildings in Singapore behind the iconic Merlion. Tourists with masks stand in front)

SINGAPORE: The office may never reach its past heights in the post-pandemic world but the outlook for Singapore and Hong Kong offices is promising.

Relatively small homes in those cities, short commutes to work and new tech firm tenants bode well for property trusts that focus on those markets.

Domestically focused real estate investment trusts (REITs) in these hubs have outperformed their peers in Australia and Japan this year, and continue to rise on the back of a rotation to economically sensitive stocks.

To be sure, no one expects Singapore and Hong Kong offices to be unscathed from the pandemic. Companies like Citigroup and Mizuho Financial Group Inc in Singapore and Macquarie Group Ltd in Hong Kong are giving up office space as demand wavers and they confront a future of some remote work.

Singapore’s vacancy rates have already risen to 4.9% in the third quarter from 3.3% a year earlier, while that for Hong Kong’s Grade A office spaces was up at 9% in September from 6.1% over the same period last year, according to data from Colliers International Group Inc.

But these cities have kept the virus under relative control. Homes are also too small to make a permanent work-from-home future viable, while unlike London or New York, these cities don’t have a significant hinterland of suburbs where workers can flee to.

That’s probably why their REITs are just about 13 percentage points from erasing losses this year, while Australian and Japanese office REITs are down an average of 24%.

Singapore’s office market is likely “in one of best positions” globally because living spaces are small, supply is tight, and tech companies are increasingly looking to the country for office space, said Shern-Ling Koh, a portfolio manager at Principal Real Estate Investors.

He said after Singapore’s office REITs, he likes that of Hong Kong’s and then Tokyo’s, in that order. In Singapore, Hong Kong’s imposition of a controversial national security law this year is drawing companies, while tech giants such as China’s Tencent Holdings Ltd as well as Amazon.com Inc are setting up regional headquarters in the South-East Asian city.

“These incoming office space users from these newer industries should offset what Singapore may lose in others, ” said Yoojeong Oh, a Singapore-based fund manager at Aberdeen Standard Investments Asia Ltd.

For all its political woes and departures, Hong Kong is drawing Chinese firms in, partly due to a boom in initial public offering activity.

Plans announced this week by the government to cut stamp duties should also bolster deals in the city’s commercial property market. It helps that REITs in these two cities are relatively cheap, while offering attractive dividend yields. — Bloomberg 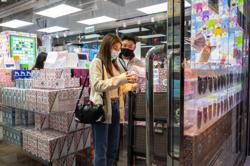