PETALING JAYA: A capital gains tax may be a potential option for the government to consider in an effort to enhance its revenue base. However, such a measure has drawn mixed views, with one economist citing the potential economic costs that could impact negatively on growth.

“While the capital gains tax raises revenue for the government, it comes with considerable economic costs. A capital gains tax imposes costs on the economy and capital market because it reduces returns on investment, and thereby, distorts decision making by individuals and businesses, ” the economist explained to StarBiz.

“It also costs more in transaction fees to individual investors. This can have a substantial impact on the reallocation of capital, the supply of capital stock and the level of entrepreneurship, ” he added.

At present, Malaysia does not impose tax on capital gains from the sale of investments or capital assets other than those related to land and buildings. The real property gains tax (RPGT) is levied on chargeable gains derived from the disposal of real property in Malaysia.

Amid the government’s declining revenue, the Inland Revenue Board (IRB) head had reportedly suggested the implementation of the capital gains tax to shore up the country’s income.

“In an effort to broaden the tax base and increase revenue, so that Malaysia can be on par with other countries in the region, the government may or should consider introducing the capital gains tax in the future, ” IRB chief executive officer Datuk Seri Sabin Samitah (pic below) was quoted as saying on Monday at the Deloitte TaxMax 2020 webinar by a local business daily. However, Lee noted that if the capital gains tax were imposed on the transaction of listed shares, it could draw a negative reaction from investors, and significantly reduce Malaysia’s attractiveness as a place of equity investment compared to countries with no such taxes such as Singapore, Hong Kong, Thailand (individual) and the Philippines (individual).

“Already, foreign investors have marginalised Malaysian equities. They would further shy away from putting their money in our stock market if there were a capital gains tax, ” Lee said.

“Bursa Malaysia has been striving hard to compete regionally in enhancing its appeal to attract more foreign listings in Malaysia. As a capital gains tax increases the marginal cost of investing, it makes a compelling case that such levies are self-destructive, ” he added.

“At the current juncture, any plan to broaden the tax base is always positive, especially in the context of the dwindling contribution from the oil and gas-related revenue, ” Afzanizam said.

“The RPGT contribution (to government revenue) is small. There is always scope to broaden the tax base, and perhaps by incorporating the capital gains tax, the coverage would be more comprehensive, ” Afzanizam said.

Sabin noted that Malaysia’s existing tax structure base was quite narrow, given the heavy reliance on corporate and personal income taxes, as well as petroleum-related taxes. Besides helping to widen the country’s tax base, Sabin said the capital gains tax could be a good measure to address income inequality in the system, as individuals in higher income brackets are more likely to have capital income. 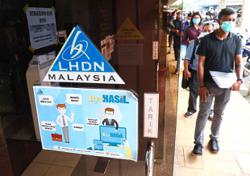