Malaysia’s inflation rate in October fell for the eighth month, down by 1.5% on-year due to lower fuel prices.

KUALA LUMPUR: Malaysia’s inflation rate in October fell for the eighth month, down by 1.5% on-year due to lower fuel prices,based on the Statistics Department data.

According to the statement on Wednesday, the decline in the Consumer Price Index (CPI) was faster than a Reuters’ poll of a fall of 1.4%. In September, the CPI fell by 1.4%.

Chief Statistician Datuk Seri Dr Mohd Uzir Mahidin said the CPI declined by 1.5% in October to 120.2 as against 122.0.

Mohd Uzir said based on the performance of 552 items by category of goods and services, non-durable goods (296 items) is a category that experienced the most price increase with 208 items, 73 items decrease and 15 items unchanged as compared to services, semi-durable goods and durable goods.

He also said the CPI for January to October 2020 decreased by 1% as compared to the same period last year due to transport, housing, water, electricity, gas & other fuels (-1.5%) and clothing & footwear (-0.8%).

“Although year-on-year CPI decreased, CPI on monthly basis increased by 0.1% as compared to September 2020, he said, adding the increase was due to alcoholic beverages & tobacco (0.1%), recreation services & culture (0.1%) and health (0.1%). 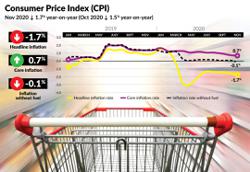