KUALA LUMPUR: The people need to evaluate the salient points of Budget 2021 to gauge the government's determination in championing the vulnerable groups who are currently facing difficulties and are economically affected by the Covid-19 pandemic.

He said the budget was formulated ensure the well-being of the people and the continuity of business, and the government was committed to consider the proposed improvements, while balancing the needs of the people.

"Of late, there have been many accusations and criticisms thrown at the government over its commitment in championing the people, even more so as Budget 2021 awaits the approval of the Dewan Rakyat on Nov 26.

"I would like to ask you to gauge the government's commitment through four economic stimulus packages that have been implemented in just eight months, which have benefited millions of families, the rakyat and hundreds of thousands of businesses.

"In fact, we have all benefited, directly or indirectly," he said when presenting the 30th Economic Stimulus Implementation and Coordination Unit Between National Agencies (LAKSANA) report today.

Tengku Zafrul said the government had taken various proactive measures in Budget 2021, among them through an additional allocation of RM1.5 billion for three months for 70,000 employers and 900,000 workers in the tourism and retail sectors.

He said the additional allocation was aimed at ensuring that all the sub-sectors involved and the most affected received adequate assistance.

The government is also ready to allocate funds worth RM1 billion for a high value-added investment incentive package for the aerospace and electronics industries, among others, and RM3.7 billion to generate employment opportunities in collaboration with government-owned companies (GLCs) and the private sector.

Funds of more than RM9 billion will be managed to strengthen the country's digital infrastructure, including improving the connectivity of 430 schools and industrial areas, as well as efforts to provide mobile electronics and laptops to help people move towards under the new norm.

Tengku Zafrul also stated that all job direct assistance and initiatives, including large-scale initiatives such as the Wage Subsidy Programme and Special Relief Facility amounting to more than RM90 billion for 2020 and 2021, are being channelled to the people, employees and employers.

He said all parties, regardless of race or religion, could apply.

"This is part of the government's agenda to ensure that every rakyat can enjoy the benefits of national development, in line with the spirit of shared prosperity through Budget 2021.

"Overall, I am confident that the government's efforts will put the country on the right track, with the track record of the best gross domestic product (GDP) performance among several ASEAN countries in the third quarter of 2020, and the declining unemployment rate," he added. - Bernama 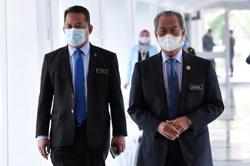