PETALING JAYA: The current tight palm oil supply situation is expected to keep the price of crude palm oil (CPO) above RM3,000 per tonne in the near term, say analysts.

This will be a boon for efficient planters, especially those with the cost of production of between RM1,500 and RM1,800 per tonne.

Maybank Investment Bank is raising its CPO average selling price (ASP) forecast for 2020 to RM2,660 per tonne from RM2,400 per tonne previously.

According to Maybank IB, the current three-year low Malaysian stockpile and weak third quarter (3Q) 2020 CPO output in Indonesia have lifted spot CPO prices to above RM3,000 per tonne.

However, despite the robust CPO prices in the near term, the research unit said in its latest report that “we are concerned about its sustainability on widened palm oil-gas oil (POGO) spread and prospects of an output rebound in 2021.”

“While the current lofty CPO price reflects the present tightness in supply, we understand Indonesia is presently entering into its peak output in 4Q20 while Malaysia could have likely peaked in 3Q20, ” it added.

Post biological tree stress in 2020, Indonesia will likely experience a strong rebound in output for 2021.

This will be aided by the recent good rainfall brought about by La Nina and a normalisation of fertiliser application encouraged by high CPO prices, the research unit pointed out. Hence, it doubted that the present high CPO price was sustainable when supply normalises. “One of the missing ingredients to sustain the lofty CPO price is the low crude oil price. “The present POGO spread is near 10-year high at US$466 per tonne as CPO price trades at a significant premium to gas oil (such as diesel).

“About 16 tonnes or 21% of the global palm oil supply is used as biodiesel feedstock globally, ” said Maybank IB.

The research unit noted that its the ASP for CPO forecast at RM2,500 per tonne may remain lofty in the first half of 2021, before seasonally higher output pressures the price of CPO in the second half of 2021.

The key risks to its 2021 CPO price forecast include a strong rebound in crude oil prices and worse-than-expected soybean crop development in South America due to La Nina. Maybank IB also said earnings per share revisions for plantation stocks under its coverage will be reflected throughout the pending results season and fresh output guidance. Meanwhile, CGS-CIMB Research concurred that the dwindling palm oil stocks will keep CPO prices elevated.

Despite maintaining a neutral rating on the sector, the research unit has raised its average CPO price forecast for 2020 to RM2,620 per tonne from RM2,500 per tonne earlier.

The stockpiles remained low compared with historical levels - the average local palm oil stock level at end-Oct for the past 10 years has been around 2.2 million tonnes.

The tight stockpile level and low supplies of other edible oils will likely keep CPO prices high. For end-November, Maybank IB is projecting local palm oil stocks to rise by 2% month-on-month (m-o-m) to 1.62 million tonnes with output and exports down by 5% and 15% m-o-m respectively.

“We expect exports to slow down post the festive demand and the sharp rise in CPO price may have led to some demand rationing, ” it added. As for CPO prices in November, Maybank IB expects CPO prices to trade in the range of RM2,600-RM3,200 per tonne.

This will raise its average CPO price target to RM2,620 per tonne for 2020 in view of the stronger-than-expected CPO price achievement over the past month.

The research unit said the key factors influencing CPO prices will include the La Nina impact on the oilseeds and palm oil supplies, China’s purchases to build up its stock reserves, and policies on biodiesel mandates. 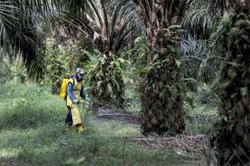