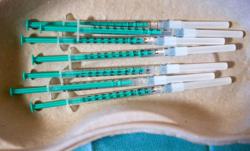 LONDON/NEW YORK: Short sellers betting against European and U.S. travel, leisure and bank stocks lost billions of dollars on Monday, after news of a COVID-19 vaccine triggered a rally in shares of companies that have suffered under months of virus-fueled restrictions and lockdowns.

Investors positioned to profit from declines in European travel, leisure and bank stocks alone lost more than $500 million on Monday, according to data provider ORTEX Analytics.

Total short-selling losses across industries are likely to have been much higher.

European travel and leisure stocks are up 12% since the start of the month while shares of banks, which are sensitive to the state of the economy and among the markets's worst performers since the coronavirus outbreak in March, reached a five-month high on Tuesday.

Rolls-Royce, Carnival and British Airways owner IAG rank among the biggest winners of this week's rally, while bank stock risers include Societe Generale, Barclays and Lloyds, all up between 10% and 25%.

But for short sellers the rebound equalled pain after several months of profitable bets -- they lost an estimated $101 million on Deutsche Lufthansa on Monday, $52 million on TUI and $66 million on HSBC, ORTEX data showed.

"Whilst Pfizer described yesterday as a great day for science and for humanity, it was anything but for short sellers who look to have been caught out by the market adjustment." said ORTEX co-founder Peter Hillerberg.

Hedge funds profit when they borrow a stock and sell it back when the price falls, pocketing the difference, a practice known as short-selling.

Funds with significant short positions in travel and leisure stocks include D.E. Shaw, GLG Partners - which had a net short position in Rolls-Royce of 0.92% on Nov. 4 - and Marshall Wace, according to UK regulatory filings. The funds either declined to comment or did not respond to requests for comment.

Betting against travel and bank stocks had been a winner for hedge funds since governments shut down swathes of their economies in March.

Short sellers had made an estimated $1.87 billion from bank shorts since March to Nov. 6 and $140 million from wagering against travel and leisure companies, ORTEX calculates.

Investors have banked profits and reduced positions since August. But significant outstanding short exposure remained as some bet on further falls following another round of government lockdowns.

"Companies whose business models have been most impaired by COVID are yet to fully recover from their lows," analysts at Barclays said in a note on Tuesday.

"They could therefore be the biggest beneficiaries of a successful vaccine deployment, as their depressed revenue and earnings are yet to recover," they added.