SYDNEY: Australia's central bank will likely expand its government bond buying programme by about A$100 billion ($71.29 billion) at its meeting next week, targeting longer duration securities, according to a Reuters poll of 14 economists.

An overwhelming majority of respondents believe the Reserve Bank of Australia (RBA) will expand its quantitative easing programme to include five-to-ten year Australian government and semi-government bonds at its Nov.3 board meeting, the poll showed.

The RBA is also widely expected to trim its cash rate as well as the target for three-year government bond yields by 15 basis points to 0.1% at the meeting, according to a separate poll conducted earlier this month. Economists say the RBA's balance sheet could easily approach A$500 billion by the middle of next year, equal to about a quarter of Australia's annual gross domestic product (GDP).

However, they are divided on the approach policymakers might take for the bond buying programme, the poll shows.

Westpac and Bank of America are among those predicting an "open-ended" bond buying programme, meaning the RBA would not commit to a number. "We think the RBA will try to maintain maximum flexibility," said Bank of America economist Tony Morris.

Morris expects around A$75 billion to A$100 billion in outright bond purchases of five to 10-year bonds by end-2021. "This could change in line with a flexible approach to the ongoing mix of the unconventional policy package," he added.

AMP economist Shane Oliver expects a monthly bond buying program of around A$12 billion with a commitment to continue it as long as necessary, saying it "will convey more conviction than say a fixed amount of A$150 billion spread over 12 months." 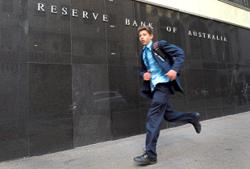