FILE PHOTO: A Scottish flag flies next to British Union Jack flag outside the Scottish Parliament in Edinburgh, Scotland.

Six years ago Scotland voted by a 10-point margin to stay part of the UK. Yet the last nine consecutive opinion polls show the backing for leave as high as 58%, and averaging at 53%. This sustained lead for independence spells trouble for Boris Johnson’s government, which fears demands for a second referendum will become overwhelming.

The Scottish National Party is expected to sweep to victory in local elections in May 2021, giving it an outright majority in the Edinburgh Assembly.

The SNP has already been trying in the Scottish courts to circumvent a Johnson veto on another referendum. Whatever happens, the nationalists will ramp up their provocations.

Last week Bloomberg News revealed that Hanbury Strategy, a consultancy firm close to the Conservatives, had drawn up a detailed plan for ministers to defeat the nationalists.

The main tidbit in the leaked memo was the advice that the government should “coopt the European Union” into arguing that an independent Scotland would struggle to rejoin the bloc. That would be an embarrassing last resort for an administration hellbent on Brexit, with or without a trade deal. The EU wouldn’t easily be coopted by Johnson.

The last independence referendum was meant to settle the issue of the Union for a generation. Yet now it’s in peril again. The threat has international ramifications.

The end of the United Kingdom would raise a question about Britain’s standing in the world, a deeper one than that posed by Brexit. If Northern Ireland were ever to vote to join the Irish republic, the damage could be limited: The status of the North has been unsettled since partition in 1921. But if Scotland were to secede that would be the end of the extraordinarily successful 307-year-old partnership that created the British Empire and fought two world wars.

Post-independence, London would lose its Scottish nuclear submarine bases and its permanent seat on the United Nations Security Council might be challenged. The rump U.K. would be diminished, in self-confidence and size.

Independence would impoverish the Scots, too. That argument clinched the vote last time and its force has redoubled since Covid-19. Sooner or later the Conservatives must make it again.

But is Johnson the right man to do it?

Before the pandemic, the Treasury in London already subsidized Edinburgh by up to £12bil a year. Scotland’s implicit budget deficit pre-crisis was 8.6% of gross domestic product, about six percentage points higher than the UK as a whole, according to the Institute of Fiscal Studies.

Post-Covid, the Office for Budget Responsibility estimates those numbers could balloon to a 19% implicit deficit. Total borrowing was already equivalent to £2,776 per person in Scotland as opposed to £855 for the UK.Pre-Covid even the SNP’s own Sustainable Growth Commission proposed holding down growth in public spending to 0.5%, “implying cuts to areas other than health, social care and pensions.”

Post-Covid that would mean sharp tax increases and spending cuts.

As it stands, London’s subsidies play into the nationalists’ hands, allowing them to implement popular - and expensive - policies.

They bankroll spending on services that are largely devolved to the Scottish government: the abolition of prescription charges, university tuition fees and free personal care for the elderly.

Scotland spends 22% more per person on education than England, with no better results. Some 10 percent of Scottish pupils are thought not to have been in education regularly since the start of the Covid outbreak.

Even if Scotland gained EU admission - a big if given Europe’s fear of encouraging separatists - the country would have a hard border with the rest of the UK over which 60% of its exports flow.

Yet heart can overrule head when the self-determination of a proud people is the issue.

There are three reasons for the recent pro-independence surge. Scots voted against Brexit by almost two to one and were dismayed by their vastly more populous southern neighbor’s decision to leave.

That has pushed many pro-Europeans into the independence camp.

Second, not since Margaret Thatcher has an English Conservative been so disliked north of the border as Johnson.

His louche, blustering image doesn’t sit well with puritan Scots. Scottish Tories ask whether his heart is in Unionism or English nationalism.

Lastly, Nicola Sturgeon, the Scottish nationalist leader, has become a commanding figure during the crisis.

Her administration’s many Covid failures replicate the blunderings of Westminster, but her reassuring language has boosted her standing.

She has deployed Scotland’s devolved powers over health to eye-catching effect.

London has discovered to its consternation that all the nations of the UK, minus England, can go their own way in this epidemic.

Historians see the glue of Union slowly dissolving. Linda Colley’s influential book “Britons, ” published 30 years ago, observed that the causes that kept the two nations together - Protestantism, empire and fear of invasion from the continent - had vanished.

But there are no inevitables in history. Unionists must put up a fight.

The Conservatives have one important ally:

The opposition Labour Party ’s leader, Keir Starmer, has so far ruled out a bargain with the SNP in return for their future support in forming a government.

But Johnson isn’t the man to lead a crusade to preserve the UK Michael Gove, his Scottish-born cabinet minister, holds the brief.

Although a talented administrator, Gove is too hot-blooded in his attachment to the Union and is burdened with other responsibilities, including Brexit.

Ruth Davidson, a recent Scottish Conservative leader with a cult following, relished combat with Sturgeon and often bested her before giving up full-time politics after starting a family and falling out with Johnson over Brexit.

She is amusing and punchy - the most convincing figure the Tories have to make the case that breaking up the Union would be bad for both sides of the border.

Johnson needs to find the right woman or man fast. Otherwise Scottish independence might turn into a bad idea whose time has come. — Bloomberg

Martin Ivens was editor of the Sunday Times from 2013 to 2020 and was formerly its chief political commentator.

The views expressed here are his. 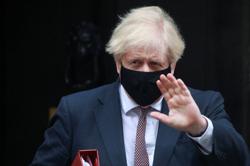