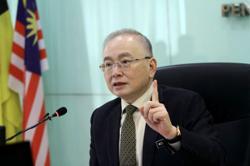 MMC owns ports including Pelabuhan Tanjung Pelepas and Johor Port in the southern state and Northport in Klang (pic).

KUALA LUMPUR: Utility and infrastructure group MMC Corp is reviving an initial public offering plan for its port assets, which could be the biggest listing in the country since 2012, according to people familiar with the matter.

The company, controlled by Tan Sri Syed Mokhtar Al-Bukhary, is seeking to raise about US$1bil (RM4.14bil) from the first-time share sale, the people said, asking not to be identified as the process is private. The firm is in talks with potential advisers and a listing could take place as early as the end of next year, they said.

Deliberations are at an early stage and details of the offering including size and timeline could still change.

A representative for MMC didn’t immediately respond to requests for comment.

MMC owns ports including Pelabuhan Tanjung Pelepas and Johor Port in the southern state and Northport in Klang besides the Penang Port. MMC’s group managing director Datuk Seri Che Khalib Mohamad Noh told reporters in 2017 that the company was planning to list its port unit in 2018 or in early 2019.

At US$1bil, the IPO would be the biggest in Malaysia since Astro Malaysia Holdings Bhd

These potential deals are expected to give a boost to the country’s first-time share sale market, which has hosted US$477mil of IPOs so far this year. Besides ports, MMC also has controlling interests in the country’s largest independent power producer Malakoff Corp and Gas Malaysia Bhd