As the nation heads toward a no deal with the European Union, UK Prime Minister Boris Johnson (pic) is still holding out room for more negotiations this year, spurring investors to prep for fresh political fireworks.

From eurozone bond spreads and equity derivatives to the shape of the inflation curve, investors can place bets on Britain’s economic future, without speculating directly on its volatile currency.

As the nation heads toward a no deal with the European Union, UK Prime Minister Boris Johnson (pic) is still holding out room for more negotiations this year, spurring investors to prep for fresh political fireworks.

With that in mind, here are some alternative investing styles to trade the torturous negotiations.

For the deal pessimists, selling Irish sovereign bonds to buy French government debt looks like a good hedge, according to JPMorgan Chase & Co.

Investors can make bets on the inverted correlation between the Irish-French bond spread and sterling, while deal optimists can go the other side of the trade.

In the equities world, one view holds that the FTSE 100 should suffer relatively less than the Stoxx Europe 50 Index on no-deal fears.

That’s because a cheaper pound tends to cushion the impact on UK-listed multinational stocks, more so than the comparable dynamic in the eurozone index.

As such, sell-side strategists have recommended selling puts on the FTSE to buy them on SX5E.

Right now, pricing appears to favour that trade with a benchmark put costing well above its five-year average relative to its counterpart, as measured in volatility terms.

Traders are expecting higher price pressures over the next five years relative to the next 30, spurring an inverted yield curve. Retail price inflation is currently seen around 48 basis points more than in three decades time, near historic extremes.

All that could change under a trade agreement that fosters a pound rally, thereby easing the imported cost pressures, according to Bloomberg Intelligence global derivatives strategist Tanvir Sandhu.

Morgan Stanley cross-asset strategist Andrew Sheets, for one, predicts a UK-EU deal in some form or another by early November, sending the pound back to US$1.40 versus US$1.30 currently.

The upside for speculators is huge: The sterling options market on Monday flashed only a 2% probability this level would be reached by mid-November.

Any sterling-positive news in the weeks ahead therefore has the potential to jolt cross-asset trades, from bond spreads to inflation curves. — Bloomberg 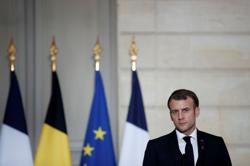