No government guarantee on loans to any airline

Nikkei Asia had earlier reported that the government had approved a RM1bil loan as a lifeline to AirAsia Group Bhd. The agency reported that the loan would be made by a group of local banks under a government scheme to help companies deal with the fallout from the Covid-19 pandemic.

KUALA LUMPUR: The Finance Ministry has not provided any financing nor guarantee to any airline, it has clarified, refuting media reports on the matter.

The agency reported that the loan would be made by a group of local banks under a government scheme to help companies deal with the fallout from the Covid-19 pandemic.

The question of funding has been touchy as the government had stated earlier that it would not bail out any airline.

Last Saturday, a group of leasing companies rejected a restructuring plan put forward by Malaysia Airlines (MAS), bringing the state carrier closer to a showdown over its future.

The lessors, claiming to represent 70% of the airplanes and engines leased to MAS, have called the plan “inappropriate and fatally flawed” and pledged to challenge it, according to a Reuters report.

is also in dire need of massive debt forgiveness from its creditors, or be prepared to shut its business down for good.

The low-cost, medium-haul airline, which has grounded all its flights due to the Covid-19 outbreak, is asking creditors and suppliers to forgo over RM63bil in liability and instead accept a maximum RM200mil in deferred payment. 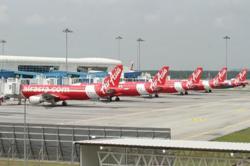