The residents’ expenditures in Shenzhen (pic) and Beijing both exceeded 43,000 yuan in 2019, and Guangzhou ranked fourth with 41,999 yuan personally spent on average.

SHANGHAI: Shanghai tops 35 major Chinese cities in consumption expenditures per capita in 2019, with 45,605 yuan (US$6781.46) spent, followed by the three other first-tier cities of Shenzhen, Beijing and Guangzhou.

Seventeen cities have personally spent over 30,000 yuan on average, and most of them are from economically developed coastal regions in the east, according to financial media Yicai.com.

The consumption capability of Shanghai has seen rapid growth year-on-year, with its expenditures per capita up 5.2% from 2018.

The residents’ expenditures in Shenzhen and Beijing both exceeded 43,000 yuan in 2019, and Guangzhou ranked fourth with 41,999 yuan personally spent on average.

As Yicai.com analyzed, the southern city’s catering industry remains vigorous, and local residents generate the highest dining expenses per capita in China for many consecutive years.

Changsha, the only central city on the top 10 list, ranked ninth with consumption expenditures per capita hitting 36,158 yuan.

Cai Fang, vice-president of the Chinese Academy of Social Science, said on a forum of Chinese new urbanisation held in Tsinghua University, that improving the consumption level of rural residents turned out to have the biggest potential to boost Chinese economic growth, as about 40% of rural residents accounted for only 22% of household consumption, Yicai.com reported. — China Daily 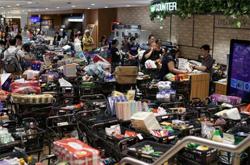