PETALING JAYA: Will construction be a sector to look out for ahead of Budget 2021 and the 12th Malaysia Plan?

Some analysts seem to think so based on its low valuations and the belief that the sector is on “the cusp” of recovery. 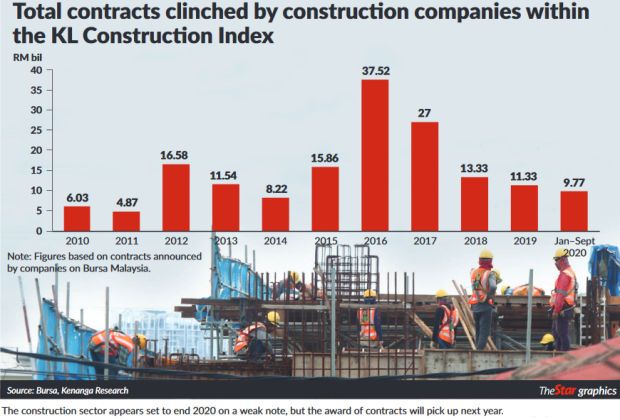 In a report released to clients yesterday, Kenanga Research said it believes “the timing is now prime to accumulate construction counters prior to key events such as Budget 2021 and the 12th Malaysia Plan. “

“The current KL Construction Index’s (KLCON) valuations of 11.5 times FY2021 price to earnings (PE) which is close to the Global Financial Crisis lows (of around 10 times PE) is unjustifiably low given that the sector is on the verge of a recovery, backed by potential projects such as the Johor Baru-Singapore Rapid Transit System (RTS), Mass Rapid Transit Line 3 (MRT3) and possibly the High-Speed Rail (HSR), “ it told clients.

While there might be some lingering concerns over a snap general election and the government’s limited fiscal strength, the research house said it believed that “the situation is not as bad as feared.”

“A snap election could lead to political stability, “ it added. Last month, it was reported that the Covid-19 pandemic had caused the local construction industry to suffer a whopping record RM18.5bil in losses during the first phase of the country’s movement control order (MCO).

The losses stemmed largely from projects that could not be delivered on time amid labour and cashflow issues within construction outfits.

Kenanga Research is optimistic, pointing out that total contracts awarded to KLCON contractors remained encouraging despite the Covid-19 crisis. “As of the first nine months of 2020, contractors within the KLCON universe have clinched a total contract value of RM9.8bil, 8.4% lower compared than in the first nine months of last year when the value was RM10.7bil, “ it said.

It said that while FY2020 is likely to end on a weak note, contract awards will rebound next year and continue to grow for the subsequent years with growth projects such as MRT3, Sabah-Sarawak Link Road, Pan Borneo Sabah, RTS, Bandar Malaysia and possibly the HSR.

It added that its channel checks indicated that sentiment on the ground was gradually picking up.

“Post second quarter results, contractors are more optimistic and generally expect more jobs to be rolled out.” It believes the sector’s appeal to investors will gradually increase ahead of the Budget 2021 which is scheduled for Nov 6, and the 12th Malaysia Plan in anticipation of the potential roll-out of mega infrastructure projects.

During this time, it is not discounting the possibility for the KLCON Index to re-rate to a 17 times PE ratio and hit 230, providing a 47% upside from current levels.

The construction sector, like the banking sector, is one which should immediately see improvement once the economy starts to purr again. It could be a sector to look out for, but only for those betting on an economic recovery sooner, rather than later.