The 30MW plant is equipped with 134,880 solar photovoltaic panels with 14 inverters.

TNB said the 30 megawatt (MW) plant is equipped with 134,880 solar photovoltaic panels with 14 inverters. It was initially targeted to start operations on Dec 31 2020.

“The early commissioning of LSS Bukit Selambau is a testament to TNB’s commitment towards delivering sustainable energy for the nation, as well as its capabilities to execute such large scale renewable energy (RE) projects,” TNB president and CEO Datuk Seri Amir Hamzah Azizan said in a statement.

“Together with the recently announced acquisition of majority control of Vortex Solar in the UK, this positions TNB as the leading domestic and among the top RE players in the region and globally,” he added.

Construction of LSS Bukit Selambau took 21 months including almost two months suspension due to the MCO.

TNB continues to work towards achieving its RE target of 1,700MW installed capacity by 2025, both domestically and internationally. Its total domestic and international portfolio currently stands at approximately 750 MW of solar and wind energy. 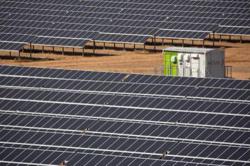