The e-wages plan being executed by Green Packet and MMAG could be extended to 2.5 million foreign workers in Malaysia.

will provide its e-wallet services to MMAG Holdings Bhd

following the move by the Human Resources Ministry to make it mandatory for salaries of foreign workers to be credited into an e-wallet or a bank account.

The letter of award to MMAG through JR Joint Resources Sdn Bhd is expected to be made this month and the crediting of salaries into an e-wallet or bank account through Ewages.

JR Joint Resources is the owner of Bestinet, which is the end-to-end platform for the management of foreign workers in Malaysia.

EWages is said to be an initiative by the government to address and solve common issues relating to the employment of foreign workers in Malaysia.

The e-wages system will allow for foreign workers legally employed to register via their employers.

This in turn would allow for the collection of data for monitoring and tracking foreign workers and will help and the presence of illegal foreign workers.

The wages are paid into the registered workers’ e-wallet which ensures no shortchanging and no dispute and the system may be able to integrate remittance instruction by the workers to their home country.

The scheme may be used for lawful deductions including for medical checkups or periodical testing and interface with eHealth initiatives such as telemedicine, to be used to purchase their daily essentials including mobile prepaid top ups.

Sources said the plan would start with an agreement with MMAG Holdings Bhd, which has an exclusive partnership manpower agreement with JR Joint Resources through its wholly-owned subsidiary MMANTAP Sdn Bhd to manage the total manpower solutions for China Communications Construction (ECRL) Sdn Bhd (CCCECRL) involving the ECRL project, which will have an estimated 2,000 foreign workers.

CCCECRL is the main contractor for the 640-km multi-billion-ringgit ECRL project.

JR Joint Resources Holdings Sdn Bhd is the holding company of Bestinet, which in turn is known as the major supplier of foreign workers into Malaysia from various countries.

Through that relationship, sources said the e-wages plan being executed by Green Packet and MMAG could be extended to 2.5 million foreign workers in Malaysia.

“With this system in place, MMAG will propose to implement the same for all foreign workers, currently estimated at 2 million, in Malaysia as this will help eradicate social issues and crime relating to the presence of illegal foreign workers, ” a source said.

He explained that this system is much needed in Malaysia.

“Features such as e-kyc (know your customer) screenings can be carried out to enable foreign workers to open bank accounts for transactional convenience and to lessen outflow of funds.

“The idea is also to ensure this is in place prior to borders reopening that will see more foreign workers being allowed in. By then, foreign workers will be properly documented, health screened, through MMAG’s TAHSS system, registered and tracked while their interests are safeguarded, ” he added.

“Assuming an average salary of RM2,000 per month of these workers, there could potentially be a significant amount of money going through the e-wallet of around RM400mil a month and close to RM5bil a year, ” the source explained.

Under the plan, Green packet will be the technology provider to MMAG and will provide its KiplePay e-wallet and visa prepaid card where money can be credited into.

The system is owned by Bestinet Technology Sdn Bhd, while Maasdots has the rights to promote, sell and use it.

MMAG Holdings recently saw the entry of JR Joint Resources as its new major shareholder when it bought 200 million shares or a 19.5% stake in the Ace Market-listed company. This in turn has led to speculation that Bestinet could be emerging as the controlling shareholder of MMAG.

It bought the shares at RM1.50 per share for a total price of RM300mil.

Prior to the entry of JR Joint Resources, largest shareholder of MMAG was its non-independent, non-executive director Chan Swee Ying, who holds a 26.48% stake.

This is followed by the group’s chief financial officer Kenny Khow, whose direct and indirect interests total 14.31%.

On Sept 3, MMAG appointed Datuk Rathakrishnan Vellaisamy, the managing director of Bestinet, as a non-executive chairman of the board. 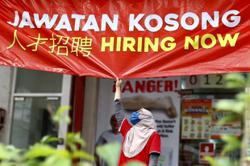