Growth strategy: A janitor pushes a cart in front of a Covid-19 coronavirus-related poster in Bangkok. The government expects total spending of about 100 billion baht (US$3.2bil) under its co-pay programmes next quarter to revive domestic demand. — AFP

BANGKOK: Thailand may avoid its worst-ever economic performance by boosting cash handouts to pandemic-hit citizens and accelerating government spending in the final quarter, according to Deputy Prime Minister Supattanapong Punmeechaow.

South-East Asia’s second-largest economy may shrink less than 7.5% this year with the help of various stimulus measures and barring a major second wave of coronavirus infections, Supattanapong said in an interview in Bangkok.

The government expects total spending of about 100 billion baht (US$3.2bil) under its co-pay programmes next quarter to revive domestic demand, he said.

“The money from the stimulus measures that will come out in the fourth quarter should help support the economy and curb a sharp GDP contraction, ” Supattanapong said in his first interview with a foreign media organisation since taking over a month ago.

“Economic indicators show that there’s an increase in consumption, mobility, and confidence, although tourism and services sectors are still struggling.”

The deputy premier, who is in-charge of the economy, said his optimism for better-than-forecast growth stemmed from an expected improvement in exports in July and August. The government would continue to spend money to support various sectors of the economy, especially tourism, he said.

Thailand’s central bank and the finance ministry both say the economy is on track for its worst year on record, with the latter predicting gross domestic product to shrink 8.5% this year as tourism and trade slump. The country’s biggest decline in growth previously was in 1998 during the Asian financial crisis when it contracted 7.6%, official data show.

“Encouragingly data from the region shows that few pockets of external demand are faring better than other traditional sectors, providing a fillip, at the margin, to Thai exports, ” said Radhika Rao, an economist at DBS Group Holdings Ltd in Singapore. But “the risks of a deeper contraction stem from slower fiscal disbursements, premature lowering of guard against the pandemic and belated reopening of international borders.”

A senior central bank official warned earlier this week the economy could also contract next year unless a ban on foreign tourists, imposed early in the Covid-19 outbreak, is eased.

The pandemic has devastated tourism, the cornerstone of Thailand’s economy, and which provided more than US$60bil in revenue from about 40 million visitors in 2019.

Prime Minister Prayuth Chan-Ocha is now betting on the gradual return of foreign tourists to save the jobs of millions of people employed in the hotel and tourism industry with the cabinet earlier this week clearing long-stay visas for visitors.

Supattanapong said the government would expand a co-pay programme to boost consumption and tourism among the middle- and high-income groups. — Bloomberg 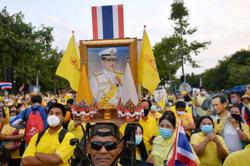