MOSCOW: Vladimir Potanin, one of the 50 richest people on the planet, stood awkwardly on the Siberian tundra near the remote mining city of Norilsk.

It had been less than a week since a spill that threatened to become one of Russia’s worst disasters in the Arctic, caused entirely by an aging fuel tank owned by his mining operations.

The billionaire was about to receive a verbal lashing from Russian President Vladimir Putin in front of a national audience.

The live broadcast was supposed to be a celebration of Ecologist’s Day, which meant the timing couldn’t have been worse. Nornickel, the company run by Potanin, made global headlines on May 29 by leaking 150,000 barrels of diesel into a damaged Arctic ecosystem. The accident set off a summer of dismal news from across Siberia that would within weeks include record-breaking heat, startling wildfires, and melting permafrost. The Russian leader was not pleased.

“Vladimir Olegovich, ” Putin said in the videoconference, using his patronymic in an official flourish, “we have known each other for a long time.”

Wasn’t it true, he demanded, that the cost of the cleanup will far exceed the value of the diesel tank that collapsed? “Of course, ” the billionaire conceded. If the company had only replaced the tank that leaked, Putin continued, then “there would be no environmental damage, and the company would not have to bear such costs.”

The discussion moved to other issues, leaving the 59-year-old Potanin on the vast Siberian plain facing a problem with no easy fix. It wasn’t just the environmental damage that had provoked Putin’s display of public anger, nor the implied risk for any businessman on the wrong side of the Kremlin. An environmental watchdog eventually assessed a 148 billion-ruble (US$2bil) levy against Nornickel for polluting the area.

This summer laid bare the unlikely role Potanin finds himself playing in the face of climate change. The Arctic is warming with such rapid speed-more than twice as fast as the global average-that it serves as a leading indicator. The Arctic also happens to be where Nornickel’s mines produce enormous quantities of the minerals essential for rechargeable batteries. It’s the source of nickel and cobalt found in millions of electric vehicles, as well as much of the palladium inside the catalytic converters that reduce tailpipe emissions.

That pushes Potanin into a paradoxical position: He manages a sprawling mining complex that produces raw materials needed for the transition away from fossil fuels, and his operations disgorge dangerous pollution into the fragile Arctic.

The chief asset of Russia’s richest citizen - a chunk of the world’s ice cap - is melting before his eyes.

It’s August when Potanin arranges to meet with a Bloomberg Green reporter, two months after his scolding in Siberia. His office near Moscow is located inside Luzhki Club, a resort he built and where he now lives and works. The facility is closed to outsiders because of the pandemic. A doctor checks the temperatures and examines the throats of Potanin’s visitors.

He readily concedes that the Russian president was quite right, of course, but quickly explains that he miscalculated rather than ignored the risks. “The accident, ” Potanin says, “showed that the consequences of the thawing permafrost are generally underestimated.”

Permafrost that’s been frozen for thousands of years is thawing as Arctic temperatures rise. While all companies and cities built on frozen soil are affected, Nornickel is particularly vulnerable. Eighty-five percent of the company’s infrastructure, from roads and pipelines to processing plants, sits atop thawing permafrost, according to Morgan Stanley. The process gives what was once solid land the characteristics of a slow-motion earthquake. For Putin’s part, the climate cause has been only lightly taken up. After more than three years of foot-dragging, the Russian leader ratified the 2015 Paris Agreement.

His reasons had less to do with atmospheric science than geopolitics and gross domestic product.

“For our country, participating in this process is important, ” Putin said after touring an Arctic military base last year.

Potanin sees his company’s climate-driven risks as a Russian problem because 60% of the nation’s territory is permafrost. Russians are by now familiar with news about potholes as deep as 280 feet that engulf houses. People used to consider these issues a normal part of life, Potanin says, the sort of damage that just needed small repairs before moving on.

“Turned out, it’s not enough, ” he says, referring to the old diesel tank that’s caused him so much trouble.

“Such a routine attitude toward permafrost has become obsolete.”

Temperatures in some parts of Siberia were 8C above the historical average for the first six months of 2020.

One town, Verkhoyansk, registered 38C (100.4F) in June, a month when maximum average temperatures are normally around 20C. At current warming rates, the Russian Academy of Sciences expects the country’s permafrost zone to shrink 25% by 2080, threatening US$250bil in infrastructure.

The danger is not just to the Arctic and its corporate owners.

The frozen ground acts as long-term storage for greenhouse gases such as carbon dioxide and methane.— Bloomberg 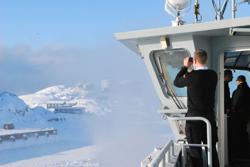 As the Arctic's attractions mount, Greenland is a security black hole 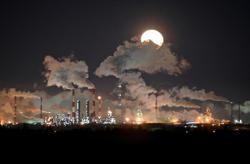 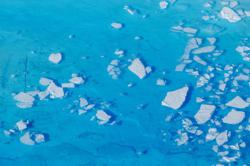