July exports at second highest on record of RM97.12b

A statement by the Minister of International Trade and Industry (MITI) on Friday China continued to be the biggest export market for the fourth consecutive month comprising iron and steel products, solid-state storage devices (SSD) and palm oil.

MITI said for July, the total exports were also the highest export value ever recorded for the month of July.

“This was contributed by higher exports of electrical and electronic (E&E) products, rubber products, other manufactures especially SSD, optical and scientific equipment, wood products as well as iron and steel products.

There was an increase in palm oil and palm oil-based agriculture products, valued at RM4.76bil, increased by 52%;

MITI said a total of 4.15bil in optical and scientific equipment were exported, which was a 9.9% rise.

As for rubber products, exports were valued at RM4.01bil, representing a 93.9% jump.

It also pointed out that exports to China continued to expand for four consecutive months, up by 13.9% to RM15.58bil.

This was driven by higher exports of iron and steel products, other manufactures (SSD), palm oil and palm oil-based agriculture products as well as manufactures of metal.

MITI also said the US was the second largest export market for Malaysia in June.

The three main categories of imports by end use which accounted for 67.2% of total imports were:

Capital goods, valued at RM6.74bil or 10% of total imports, decreased by 19.7%, due mainly to reduced imports of capital goods (except transport equipment), particularly parts of machinery and mechanical appliances;

Consumption goods, valued at RM6.38 billion or 9.5% of total imports, rose by 0.1%, as a result of higher imports of durables, particularly parts of machinery and mechanical appliances.

Trade surplus expanded by 57.5% to RM25.15bil compared to RM15.97bil in July 2019 and was the highest monthly trade surplus ever recorded.

Higher trade was registered with the US, India, Bahrain, China, Taiwan, Singapore and Hong Kong SAR. 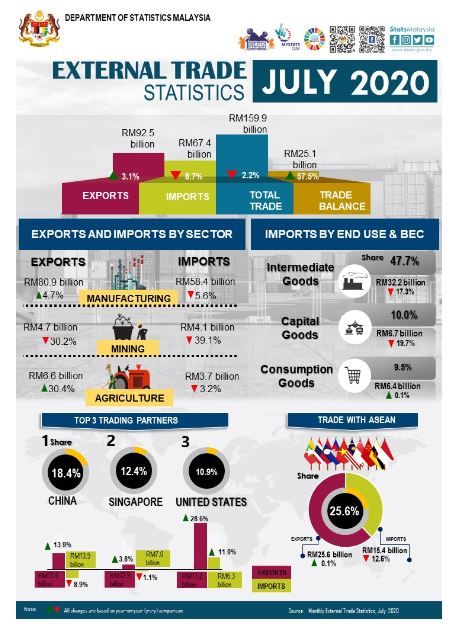