THE US dollar remained volatile during the week, closing lower by 0.33% to 92.793. It was weighed down by the Federal Reserve’s minutes which reiterated concerns over economic recovery, as well as disappointing initial jobless claims data for the week ending Aug 15 rising to 1.11 million compared to 970,000 in the previous week (consensus: 930,000).

Nevertheless, investors are broadly spooked by the Fed minutes which gave little concession to the idea of yield caps or enhanced forward guidance and gave nothing away about any shift in the Fed’s price targeting regime. Meanwhile, other economic release during the week includes:

(1) August NAHB Housing Market Index climbing higher than expected at 78 from 72 in July (consensus: 73); and

In the commodities market, Brent crude price climbed 0.22% to US$44.90 per barrel following:

(1) lower crude oil inventories by 1.6 million barrels for the week ending Aug 14, from a supply cut of 4.5 million barrels in the previous week (consensus: -2.7 million), as reported by the EIA; and

(2) Opec+ producers almost fully complied in July at 97% rate with their global production cut agreement. Nonetheless, there is an urgency to fix daily oversupply issues by Opec+ as some of the oil producers would need to slash output by an extra 2.3 million barrels per day (bpd) to make up for their recent oversupply.

The euro posted a weekly gain of 0.15% to 1.186 supported by the weaker dollar as the eurozone economy has put a firm backstop in place to support economic growth, which has reinforced confidence on the bloc. Nevertheless, the focus of the week was on the European Central Bank (ECB) July meeting’s minutes which revealed that the central bank remained very cautious regarding the economic outlook. The ECB also viewed the current monetary stance as “adequate” and a “recalibration” was “not deemed necessary”.

The pound rallied by 0.98% to 1.321 owing to early week Brexit optimism. However, the gains were pared towards the end of the week as the threat of a no-deal Brexit re-emerged. Though the UK prime minister’s spokesperson has shown positivity that a trade deal will be struck, and suggesting it could be as soon as next month, EU leaders have so far rejected the UK’s demands – calling them “fundamentally unbalanced”. At the same time, the pound received some impetus mid-week after July’s inflation rate jumped to 1% year-on-year (y-o-y) from 0.6% y-o-y in June (consensus: 0.6%).

The yen remained in bids over the week, closing higher by 0.75% to 105.8, supported by ongoing higher demand for safe-haven assets. Meanwhile, economic release for the week includes:

The majority of Asia ex-Japan currencies strengthened against the dollar. The top gainer was the Chinese yuan, rising 0.50% to 6.916 as the central bank kept both the 1- and 5-year loan prime rates unchanged at 3.85% and 4.65%, respectively. In contrast, the Thai baht depreciated by 0.90% to 31.412, dragged by the second quarter GDP that showed a 12.2% y-o-y contraction – the steepest contraction since the Asian financial crisis in 1998, from -2% y-o-y in the last quarter.

In the local space, the ringgit strengthened 0.45% to 4.174 ahead of a domestic public holiday. Looking at the economic development, the headline inflation slowed down to 0.7% m-o-m in July from 1% m-o-m in June.

The US Treasury curve bull flattened during the week, with the longer end falling 3.7-5.1 basis points (bps) while the shorter tenures eased 1–1.6bps. The demand was supported by:

(1) the Federal Reserve’s minutes which reiterated concerns over economic recovery;

(2) a stalemate of the next round of stimulus package negotiations in the Congress; and

The local bond market traded in thin liquidity owing to a holiday-truncated week. The Malaysian Government Securities (MGS) curve steepened slightly while the closely watched 10-year MGS remained unchanged week-on-week (w-o-w) at 2.505%. Nonetheless, sentiments were slightly positive in the bond market post-Goldman Sachs’s announcement of settling the US$2.5bil payment in the coming 10 days – which brought some relief on the fiscal front.

During the week (Aug 14–19), the FBM KLCI gained marginally by 1.04 points (pts) or 0.07% to 1,575.38 pts, which was fairly consistent with the flattish performance of both the Dow Jones Industrial Average (-0.73%) and MSCI Emerging Markets Index (+0.27%). Locally, there had been increased volatility in glove stocks, driven by news such as the rollout of the Sputnik V vaccine by Russia and the potential windfall tax on glove producers.

Globally, the Fed expressed concern over the economic outlook in the minutes from its latest Federal Open Market Committee but fell short of providing hints of fresh asset purchases, while the latest US weekly jobless claims came in worse than expectations. These were partially mitigated by signs of progress in the negotiation of the second Covid-19 relief plan in the US.

Foreign investors bought RM46.6mil worth of Malaysian equities during the week, but year-to-date net outflow remained elevated at RM19.7bil. Local institutional and retail investors continued to dominate the market trading, with a participation rate in August of 44.3% (versus 47.8% in July) and 45.5% (versus 39.7% in July), respectively. As foreign investors continued to stay relatively passive, their participation rate in August fell to 10.2% (versus 12.5% in July).

Equity trading activities remained on an uptrend with the average daily value traded rising to RM7.5bil in August (versus RM5.5bil in July) while turnover velocity increased to 109.7% in August (versus 81.3% in July).

Over the week, six out of 13 sectors in Bursa Malaysia ended in the positive territory. The top performing sector was Technology (+3.4%) on strong earnings prospects driven by the accelerated digitalisation of the economy amidst the unabated pandemic. The worst performing sector was Construction (-3.0%) as players continued to struggle on various operational issues under the new norms while their order books depleted. 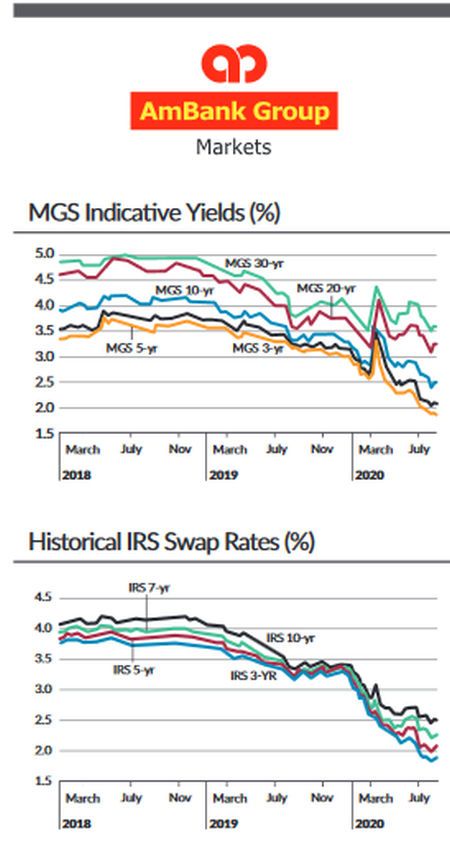