Corporate America worries WeChat ban could be bad for business

In this photo illustration, the WeChat app is displayed in the App Store on an Apple iPhone on August 7, 2020 in Washington, DC.

More than a dozen major U.S. companies raised concerns in a call with White House officials on Tuesday about the broad scope and impact of Trump's executive order targeting WeChat, set to take effect late next month, the report added.

The companies said action against the app could undermine their competitiveness in the world's second-biggest economy, according to the report.

Apple Inc, Ford Motor Co, Walmart Inc and Walt Disney Co were among those participating in the call, the Journal reported citing people familiar with the situation.

The companies did not immediately respond to Reuters requests for comment. - Reuters 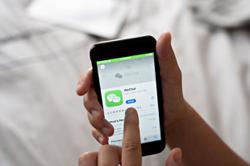