Insight - Not so fast on that Transatlantic switch

Positive outlook: A pedestrian walks past a panel showing the HSBC lion at its headquarters in Hong Kong. HSBC, for one, is convinced the US dollar will rebound and its FX team on Tuesday retained their standing US$1.10 euro/dollar forecast. — Reuters

IT was the big idea at mid-year but already there’s some trepidation that a Transatlantic switch from US to European equities may have jumped the gun.

Half way through one of the most tumultuous years for the global economy and markets many investors felt a blanket worldwide recovery trade should be replaced with more regional discrimination and several funds recommended a switch to European equities from pricier Wall Street stocks.

Assumptions behind the switch included a faster rebound in Europe’s economy due to more successful virus controls, avoidance of the dollar ahead of November’s US election and a perception that the European Union’s post-pandemic Recovery Fund of fiscal transfers and joint debt sales would reduce eurozone break-up risks.

That’s certainly played out on the foreign exchange markets, where the rising euro gained another 6% against the US dollar in July to reach its highest in two years.

Data also shows some signs of US investors stepping back into European equity exchange-traded funds while Bank of America’s July survey of global fund managers showed allocations to euro equities had increased 9 percentage points to a net 16% overweight position.

But the currency move has so far flattered the stock performance and, as analysts at Societe Generale point out, Europe, Britain and Japan all posted negative equity returns in July in local currency terms, with France’s CAC 40 and Britain’s FTSE 100 even back in bear market territory for 2020 as a whole.

What’s more, as the second-quarter earnings season unfolds, the underlying equity rationale for exiting US stocks has also faded – with an impressive showing for Wall Street’s tech titans and mega stocks as well as small cap firms.

S&P 500 earnings growth is now forecast to decline by “just” 18% in 2020, shocking on its own but an improvement of almost a fifth from where it was as the end of June. And although Europe is also seeing positive surprises, they have not yet lifted the 2020 view with earnings still on course to fall 33% this year.

The relative outperformance for European earnings is now all loaded into next year as the US picture for 2020 improves rapidly despite the persistence of the pandemic stateside and the looming presidential election.

UBS Global Wealth Management’s chief investment officer Mark Haefele described US second-quarter earnings beats as “eye popping”, saying that overall they are exceeding expectations by a whopping 18.6%, with sales ahead by 2.7% and estimates for the third quarter up by 2.5% in just over a month.

“This is very unusual. Typically, estimates fall by more than 3% for the upcoming quarter, ” he said, adding that this argued for a broad rebalancing of exposure beyond the tech leaders.

And so, on one level, the relative Transatlantic picture may be easily understood in the light of second-quarter gross domestic product numbers that showed the US economy contracted almost 4 points less than the 12% eurozone slump.

But US equity expectations for this year as a whole are now improving independently of Europe and causing some to rethink any decision to switch away from Wall Street just yet.

Steven Bell, chief economist at asset manager BMO GAM, said the weeks ahead may well be tricky for the US economy and the dollar but “we still prefer the US despite all of the economic reservations”.

Pricewise at least, the burden of proof lies with Europe. Even in dollar terms, the S&P 500 has outperformed the euro STOXX50 and FTSE 100 by about 12% and 24% respectively so far this year – while the high-flying tech leaders of New York’s FANG+TM index are more than 55% ahead.

That leaves a lot of onus on the exchange rate to generate the relative returns by the end of the year. It’s hard to see a mass return to the dollar this side of November’s poll but not all are convinced its fortunes will nosedive continuously – not least with inevitable grumbling from European exporters and policymakers likely to greet further euro gains.

HSBC, for one, is convinced the US dollar will rebound and its FX team on Tuesday retained their standing US$1.10 euro/dollar forecast, arguing that global uncertainty remained too great, European fiscal affairs were too fragile and the likelihood of a post-election return to dollar assets was significant.

What’s more, Bank of America frets that European credit guarantee schemes – which have been successful in collapsing insolvency rates this year across the continent despite the pandemic shock – will start to expire in “fiscal cliffs” at the end of 2020 and unnerve credit markets then.

And so a Transatlantic switch for 2021 may still be warranted, but it will be a bumpy ride at best. — Reuters

Mike Dolan is editor-at-large for finance and markets at Reuters News. Any views expressed here are his own. 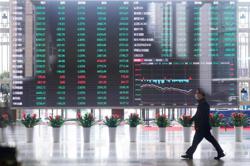