Rebound: Lundgren says he is encouraged by the higher than expected levels of demand for his airline. — Reuters

LONDON: EasyJet Plc is seeing a stronger than anticipated rebound in passenger demand following the lifting of lockdowns, prompting it to accelerate the addition of flights.

Aircraft operated with 84% of seats full in July, EasyJet said in a statement yesterday. With bookings for late summer ahead of projections it will operate 40% of capacity in the quarter through September, up from the planned 30%.

“I am really encouraged that we have seen higher than expected levels of demand, ” chief executive officer Johan Lundgren said in the release.

“We have now completed more than one month of restart operations and are seeing encouraging performance across the network.”

With Covid-19 infection levels declining in most of Europe, governments have been easing travel restrictions.

Britain’s biggest low-cost carrier was among the first European airlines to begin building up services as lockdowns eased, though the reintroduction of UK curbs on people arriving from Spain has created some uncertainty, according to Lundgren.

Sanford C. Bernstein analyst Daniel Roeska said in a note that EasyJet’s seat-occupancy level and a lower-than-expected cash outflow were both “modestly encouraging”.

A comparison of July traffic shows that EasyJet has been less aggressive than rival discounters in bringing back flights, resulting in higher occupancy levels.

Smaller Wizz Air Holdings Plc, the low-cost leader in Eastern Europe, has been faster in building up its schedule and carried 1.8 million passengers with a lower load factor of 60.5%.

Roeska said EasyJet’s steadier approach may reflect either lower demand on the routes it serves, which have a higher mix of business passengers, or more caution on the part of management.

EasyJet posted just £7mil (US$9.2mil) in revenue for the fiscal third quarter ending June 30, down from £1.76bil a year earlier, after resuming flights mid-month following a near grounding of its fleet at the height of coronavirus lockdowns.

It posted a loss of £324mil versus a profit of £174mil, though it said the loss for the current quarter should be smaller.

EasyJet, which raised £419mil in a share sale in June, said it’s planning to sell more planes to raise about £245mil, before leasing them back.

Lundgren said on a media call that Britain’s 14-day quarantine for arrivals from Spain will most likely push people to visit alternative sunspots, adding that there’s little visibility into demand beyond September. — Bloomberg 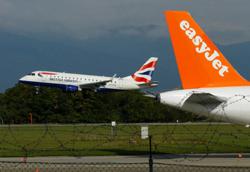