Singapore Air stock at lowest this century after record loss

The shares fell as much as 5.1% to S$3.35, the lowest intraday price since September 1998, before paring to close S$3.42, down 11 Singapore cents from a day earlier. The stock, which has declined by almost half this year, was among the worst performers Thursday on a Bloomberg gauge of carriers in the Asia-Pacific region.

SINGAPORE: Singapore Airlines Ltd’s shares fell to their lowest price in more than 21 years after the carrier posted its biggest quarterly loss ever as the coronavirus wiped out travel demand.

The stock, which has declined by almost half this year, was among the worst performers Thursday on a Bloomberg gauge of carriers in the Asia-Pacific region.

Air traffic the world over has plunged because the pandemic led to tight border controls and a reluctance to travel.

The International Air Transport Association said Tuesday the airline industry is unlikely to recover fully before 2024.

The situation is particularly difficult for carriers like Singapore Airlines that have no domestic market to cushion the blow.

The net loss in the three months through June was S$1.12bil (US$815mil), compared with net income of S$111mil a year earlier.

Sales dropped 79% to S$851mil, and traffic measured by revenue passenger per kilometre sank 99.5%.

CGS-CIMB analyst Raymond Yap cut his recommendation on Singapore Airlines to a “hold” from “add” following the results.

Singapore Airlines said on Wednesday its passenger capacity still may be less than half of pre-coronavirus levels by the end of its fiscal year next March.

The airline also said it is reviewing its network to determine the size and mix of its fleet over the longer term.

The review, which should be completed by the end of this quarter, could lead to a material impairment of about S$1bil on the carrying values of older generation aircraft, particularly Airbus SE A380s, Singapore Airlines said.

The carrier’s fuel hedging policy led to a S$535mil loss in the quarter, while there was also a S$127mil hit from the liquidation of NokScoot Airlines Co.

Singapore Airlines owned a 49% stake in the low-cost Thai carrier that collapsed in June.

Singapore Airlines was operating only to 24 cities by the end of June.

Its SilkAir unit ceased most operations except for flights to Chongqing, China, and it suspended flights to the Thai resort island of Koh Samui.

Low-cost unit Scoot operated a minimal network to cities such as Hong Kong and Perth, Australia.

Passenger capacity at the end of the second quarter is forecast to be about 7% of the level before Covid-19.

Out of a fleet of 213 passenger aircraft, only 32 are being deployed, the airline said. — Bloomberg Singapore Airlines braces for another record loss on virus 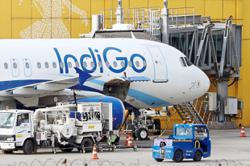