In Thursday's independent advice, KAF IB said the proposed exemption would enable THHE Group to leverage on the continuous support and contribution from UJSB towards its the future development and direction.

(THHE) have been advised to vote in favour to exempt Urusharta Jamaah Sdn Bhd (UJSB) from undertaking a mandatory takeover offer.

In the circular issued on Thursday, it recommended the non-interested shareholders to vote in favour of the resolution pertaining to the proposed exemptions to be tabled at the EGM on Aug 14.

To recap, on Feb 13,2015, THHE proposed to undertake a renounceable rights issue of up to 1.20 billion Islamic irredeemable convertible preference shares (ICPS-i) at an issue price of 25 each to raise RM300mil.

Pursuant to the rights issue, Lembaga Tabung Haji (LTH), being THHE's major shareholder at that time, said it would subscribe in cash its entitlement of up to 356.43 million ICPS-i amounting to a maximum of RM89.11mil and up to 743.56 million ICPS-i up to maximum of RM185.98mil which were not subscribed.

Accordingly, LTH subscribed for 1.097 billion ICPS-i and following the completion on Sept 14,205, they were listed on the Main Market.

Each ICPS-i is convertible into one new THHE share during the five year period when they mature on Sept 7,2020. As at the last practical date, there were 1.099 billion outstanding ICPS-i.

On Dec 28,2018, LTH ceased to be a major shareholder of THHE following the restructuring exercise undertaken by LTH.

Upon the mandatory conversion, the UJSB shareholdings in THHE will increase to 64.45% and it would then have to extend a mandatory offer.

As UJSB did not not intend to undertake a mandatory offer, it sought an exemption from the Securities Commission, but this would depend on the non-interested shareholders at the EGM agreeing to it.

In Thursday's independent advice, KAF IB said the proposed exemption would enable THHE Group to leverage on the continuous support and contribution from UJSB towards its the future development and direction.

“The proposed exemption provides an opportunity for the non-interested shareholders of THHE to continue their equity participation in a listed company.

“With the group’s past experience in the oil industry and its plan/effort taken to cushion the negative impact of the various external headwinds such as expanding its shipbuilding and ship repair operations, the non-interested shareholders of THHE may be able to enjoy potential long term growth prospects of the group without any investment outlay to be incurred through the continuous equity participation in THHE after the mandatory conversion, despite the challenging outlook in the near term amid the Covid-19 pandemic, ” it said. 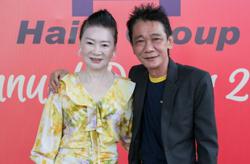