Not an easy market

BURSA Malaysia is not a market for retailers. Some 30% of the index weighting is on glove stocks – namely Top Glove Corp Bhd

On a single day, the price of the four glove stocks can gyrate anywhere between 20% and 30% and it is accompanied by huge volumes, which suggests that it is a playing ground for the funds as well as punters.

A normal investor would probably have had a heart seizure. Anybody who had bought the stock at the peak with the view of selling on the same day would have lost his or her pants.

The story is the same for all the other glove stocks. The price gyration is scary, to say the least. The stocks are up in the morning before coming down late afternoon and picking up strongly by the end of the trading day.

Clearly, it is not the kind of market for retailers. It’s only for those who are really experienced in trading and understand the dynamics of jumping in and out without getting hurt.

Some research houses have tagged unprecedented valuations on glove stocks. It’s surprising that even the foreign houses have raised the price of the top-notch glove companies such as Top Glove and Hartalega to more than RM30. Credit Suisse’s target for Top Glove is RM37.

Glove stocks are trading at historical price earnings (PE) multiple of between 75 time and 170 times at current prices. Among the four glove manufacturers, the stock with the highest PE multiple is Supermax while Kossan Rubber Industries Bhd

If the stocks hit the price targets as set out by the research houses, we are looking at Supermax possibly trading at almost 200 times PE and Top Glove at more than 120 times PE. The mind-boggling valuations are jaw-dropping but analysts seem to suggest that the stocks have the earnings potential.

The upgrade in price targets by research houses suggests that there is an impending earnings explosion of the companies in the second quarter. But what the research houses fail to stress is the sustainability of the earnings.

To the pessimist on glove stocks, they would say that analyst reports certainly are not a yardstick as they are just forecast numbers and not any indication to buy or sell the stock.

However, to be fair, some research houses had predicted Top Glove to be RM25 a month ago when it was barely touching RM15. Then, many had dismissed the price target as nonsensical. Now, RM25 seems to be a reasonable price for Top Glove for some.

Amidst the optimism surrounding glove stocks, it’s interesting to note that the major shareholders of Kossan have disposed of a little of their holdings in the market. The family of Tan Sri Lim Kuang Sia, who control Kossan and are known for not selling their shares even when prices were high, sold a few million shares in recent weeks.

The family still retains a substantial 47% in Kossan. Their move to take some money off the table is something that should not be dismissed. It’s a clear signal that glove stocks are looking over-valued.

The interest on glove stocks is so huge that it is said to be responsible for the crash of Bursa Malaysia’s trading system on Thursday. The crash came as there was heavy selling on glove stocks following news that the US authorities have stopped some shipments of Top Glove’s exports to that country.

The US market accounts for 25% of Top Glove’s exports and gives the highest average selling prices for the gloves. Hence, the impact is significant on Top Glove.

The announcement was out during the lunch break although news of the consignment being stopped seeped into the market in the morning. Top Glove resumed trading at 3.30pm. Shortly later, the system crashed.

Brokers feel that the crash came about because of the heavy sell order for glove stocks, which is not surprising considering the volume these stocks garner.

Bhd and Unisem Bhd were the darlings of the stock market.

The stocks were on an uptrend for almost a year before the dotcom crash in 2000. The two stocks hit ballistic valuations that not many fund managers had envisaged. Until today, the two stocks are still considered the bell-weather for the tech sector.

But now there are many more players in the tech sector. They are diversified into several segments within the sector and Technology is an index within Bursa itself.

Similarly, the play on glove companies is now focused on the top four stocks. The others are enjoying the run on the sector. If demand for gloves continues, the sector will likely see more new names emerging on the stock market.

There are many glove companies that are unlisted. It’s only natural for unlisted companies to emerge in the capital markets when valuations are ballistic.

It’s better to put money in the new names instead of the current basket of companies on Bursa Malaysia where valuations and trading volumes are dangerous for retail investors. 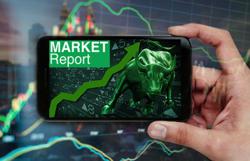