AirAsia posted a net loss of RM803.85mil for the 1QFY20 against a net profit of RM96.09mil for the corresponding period last year, partly dragged down by its wrong hedge against crude oil prices, which collapsed in March, and a hefty depreciation.

Kossan Rubber is acquiring an industrial property measuring 4.05ha in Meru, Selangor for RM40mil cash, from Advance Boilers Sdn Bhd, a wholly-owned subsidiary of CB Industrial to facilitate an expansion of its production facilities.

Yinson said its 49%-owned joint venture is entitled to receive the balance amount of US$33.1mil (RM141.67mil) from PetroVietnam Technical Services Corp, after the two parties reached a final settlement agreement of US$64.4mil (RM275.63mil).

, which owns and operates a jack-up rig known as Perisai Pacific 101.

“Following the bullish performances in the US and Europe, the FBM KLCI could extend its uptrend towards the resistance of 1,590 points,” JF Apex said. 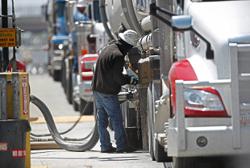