SINGAPORE: Temasek Holdings Pte is prepared to drop a S$4bil (US$2.9bil) bid for control of Keppel Corp should the Singaporean conglomerate’s next earnings report trigger a clause that allows it to walk away, according to people familiar with the matter.

The state investment firm is keeping a close tab on Keppel’s financials considering any significant impairment could trigger so-called material adverse change clauses, said the people, who asked not to be identified as the information is private.

Temasek can’t adjust its offer price in accordance with the terms of the deal, leaving it little wiggle room, the people said.

Keppel is due to report its second-quarter earnings next month, while Temasek has until October to complete the deal, pending regulatory approvals.

Negotiations and work on the transaction are ongoing and no final decisions have been made, the people said.

Temasek said it had nothing to add beyond comments made by its financial adviser Morgan Stanley. Keppel didn’t immediately respond to a request for comment.

Morgan Stanley, Temasek’s adviser on the Keppel deal, said in a letter June 21 that there are relevant thresholds by which the material adverse change clause could occur as a result of accounting impairments.

That could in turn affect Keppel’s net asset value or after-tax profit, the bank said.

Temasek, which already owns about one-fifth of Keppel, offered to buy an additional 30.6% stake in October.

Keppel’s business has been affected by the global economic slowdown and lockdowns in various countries due to the Covid-19 pandemic.

The conglomerate reported a 21% drop in net income for the first quarter.

Earlier this month, Keppel asked its associate company Floatel International Ltd to conduct a review of its impairment assessment after one of its major rivals took a large hit to the book value of its vessels following a re-assessment of the market outlook.

Keppel, which owns a 49.9% stake in the oil drilling fleet operator, had initially said no impairment would be made.

The impairment charge for Keppel from Floatel’s review could be about S$130mil, according to Macquarie Group Ltd. estimates.

Factoring in its investment gains and land sale, Keppel will need to post at least S$88mil in net income to stay within the material adverse change clause for the deal with Temasek, Macquarie said on June 1.— Bloomberg 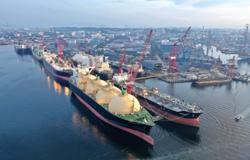