KUALA LUMPUR (Bernama) -- While S&P Global Ratings has lowered its outlook on Malaysia, the government believes that its proactive response to the crisis due to COVID-19 is both timely and appropriate, said Finance Minister Tengku Datuk Seri Zafrul Abdul Aziz.

He said initiatives and measures under the RM295 billion stimulus and recovery packages were aimed at protecting lives, supporting businesses, saving and creating jobs, as well as stimulating the economy.

Collectively, the PRIHATIN Rakyat Economic Stimulus Package (PRIHATIN), PRIHATIN SME Plus and National Economic Recovery Plan (PENJANA) packages worth RM295 billion were expected to contribute more than 3.0 per cent to Malaysia’s gross domestic growth (GDP) growth in 2020, he said in a statement today.

S&P Global Ratings has reaffirmed Malaysia’s ‘A-’ rating with a revision of the outlook to negative from stable, reflecting the additional downside rosk to the government's fiscal metrics.

Tengku Zafrul noted that most of the measures introduced by the government under the stimulus and recovery packages were either one-off or temporary, and therefore would not have a permanent impact on government finances in the medium term.

"Furthermore, Malaysia has sufficient liquidity in the domestic market for the government to raise additional financing.

"The government is also focused on preserving fiscal discipline to maintain the systemic strength and integrity of the economy, and to ensure Malaysia has the ability and capacity to quickly rebound when the economy recovers,” he said, adding that this optimistic outlook on the Malaysian economy was also shared by S&P.

According to him, in the medium and longer term, the government remains committed to its fiscal reform agenda and will resume its fiscal consolidation effort once the global economy recovers.

Going forward, Tengku Zafrul said, the government was committed to a medium-term consolidation of the fiscal deficit to below 4.0 per cent of GDP.

"Together with the flexible exchange rate, the Malaysian economy remains resilient in the face of potential external shock,” he said.

Tengku Zafrul said S&P's outlook revision was driven by the negative impact of the COVID-19 pandemic on Malaysia’s economic growth and fiscal position.

He said Malaysia’s current fiscal policy response was the right course of action as there had been an urgent need to ensure substantial stimulus measures and economic recovery plans were implemented expeditiously.

The minister said this was further supported by the optimistic outlook on the economy in S&P Global Ratings’ report which projected the country’s strong GDP growth recovery of 7.5 per cent next year.

"The current crisis has, in fact, impacted many countries’ sovereign ratings, reflecting the significant challenges in the global economy like weaker growth prospects, larger fiscal deficits and higher debt levels.

"These countries with open economies, like Malaysia, have responded with substantial macroeconomic and fiscal measures to reduce the adverse health and economic impact of the COVID-19 pandemic.

"This, in turn, has also led to the lower sovereign ratings outlook for several economies, both advanced and emerging,” he said.

Over the last few decades, Malaysia had remained resilient despite various challenges, including the Asian financial crisis and the global financial crisis, due to its sound economic fundamentals and well-developed institutional framework, as well as deep and well-regulated financial markets, Tengku Zafrul said.

China's FDI in non-financial sector grows 0.5 per cent in Jan-July Malaysia's economy on track for recovery in 2021, Zafrul says 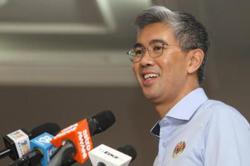