WASHINGTON DC: Two months after its dire predictions of the steepest recession in almost a century, the International Monetary Fund will release new global economic forecasts this week that will probably look even worse.

Officials at the Washington-based Fund have warned that a revised outlook due on Wednesday may feature a more pessimistic view than in April. Back then, they said the “Great Lockdown” caused by the coronavirus would force a global contraction of 3% this year.

A gloomier forecast might reflect their assessment of the severity of damage caused by the widespread shutdown in activity. The UK economy, for example, instantly shrank by a fifth in April alone.

Any glimmers of hope the IMF can impart may channel optimism that the worst of the outbreak has passed in some countries, allowing them to ease restrictions.

That would chime with purchasing manager indexes from Japan to Europe to the US, due tomorrow, all of which are expected to show further improvement in sentiment and activity from historic lows.

“Rapid fire forecast updates reflect the shifting trajectory for the virus. Some countries - including China and Germany - have successfully bent the curve. Others have not.

“Add up that messy reality and - despite green shoots of recovery in May and June - the outlook continues to deteriorate,” said Tom Orlik, chief economist at Bloomberg.

However, most countries still face a long path back to normality from a downturn that is remarkably synchronized.

IMF chief economist Gita Gopinath, who is compiling the forecasts, noted last week that both advanced and emerging market economies will endure a recession this year - the first time both have suffered in tandem since the Great Depression of the 1930s.

June was the most open month in most of Europe after the lockdown, and a slew of activity indicators will give investors and policy makers a glimpse of how the economies are coping.

A key figure would be the purchasing managers’ index for the services industry, which was hit the hardest by the restrictions.

Confidence data will be watched closely in Sweden amid an ongoing debate over its relatively lax approach to the Covid 19 pandemic.

The European Central Bank will also publish the accounts of its June meeting, which saw policy makers decide to expand the pandemic bond-buying program beyond market expectations.

Look out for any meaningful dissenting voices among richer nations wary of extending unjustifiable support to the eurozone’s most vulnerable economies.

Elsewhere, Hungarian and Czech policy makers are expected to hold interest rates, while Turkey’s central bank is forecast to reduce its benchmark interest rate by another 25 basis points to 8% on Thursday, after a cumulative 1,575 basis points in cuts over the previous nine meetings.

South African Finance Minister Tito Mboweni will table an adjustment budget on Wednesday to redirect 130 billion rand (US$7.5bil) to a stimulus package, while, in Kenya, the central bank may ease after holding rates steady a month ago.

In the US, investors will be watching several reports, including May new-home sales, durable goods orders and personal spending, to help them fine-tune their second-quarter GDP estimates.

The government will also issue its third estimate of first quarter GDP on Thursday, along with the closely watched jobless claims report.

Meanwhile, Federal Reserve officials including James Bullard and Charles Evans, are due discuss the economy.

New Zealand’s central bank has a policy announcement on Wednesday after data showed the economy is in its first recession since 2010.

In the Philippines, a rate reduction is seen as possible on Thursday. South Korean trade data for the first 20 days of June will be scrutinised Monday for a pulse check on global commerce.

Latin America’s big economies are in the spotlight this week.

On Tuesday in Brazil, the minutes of last week’s central bank meeting -- policy makers cut the key rate to a record-low 2.25% - may clear up questions on forward guidance raised by the post-decision statement.

Later in the day, Argentina’s first-quarter gross domestic product report will capture the early phase of what’s expected to be one the region’s deepest recessions of 2020. 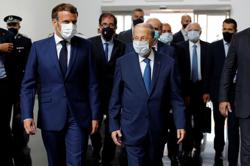